Review: Croc and the Fox by Eve Langlais 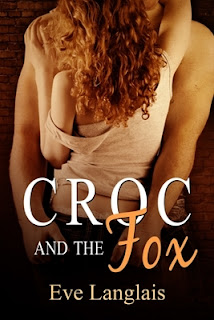 A career military man, Viktor lives for the next mission – and his collection of weapons -- but a raid on an experimental lab makes him an unwilling protector, mostly because he can’t peel Renee off. A cold blooded croc, he never intended to settle down, but he didn’t count on a foxy lady warming his heart. The world outside the laboratory was a big scary place. Frightened, Renee latches onto the biggest, baddest, and sexiest, warrior around. Sharp toothed and with ice in his veins, Viktor’s violent side should have sent her running, but instead, she finds the courage to face her fears –and tame the lizard. Warning: An ornery croc discovers he does have a pulse when a hot to trot fox decides to latch on, and never let go. Tongue in cheek humor, sizzling moments and a tiny, evil villain await.

I've only read a couple of Eve's book at this point but the more of her books that I read, the more I want to read because not only are they sexy but they are funny as well. When I first started reading this one, I was a bit confused because the heroine, Renee refers to herself as 'Project' so I wasn't sure who or what she was referring to when she said it the first time but it quickly became apparent as I read on. Not only does Renee have a strong will but she's sarcastic and funny as well. Not something that I would have expected from someone who has spent her whole life being a guinea pig for a crazy scientist.

After Viktor and his team rescued the shifters being held captive from the cells, he took Project to FUC Headquarters. When Project heard the name of the place, she had the same thoughts that I did...must be some sort of sexual experimental building but no, FUC stands for Furry United Coalition.

Renee is scared of everything after she is rescued. Good thing she's not scared of her rescuer, the big tough Croc. She latched onto him *literally* and wouldn't let go until she felt safer with her new surroundings. While Viktor isn't used to having a lovely female hanging on him and his buddies and teammates rib him a bit about it, he's a great guy.

While in captivity Renee had all sorts of experiments performed on her and one accident that left her so special it probably saved her life because the crazy doctor that held her captive realized she was special, special enough to keep around. Renee turns out to be even more unique and there's an interesting turn in the story about her that really made me smile.

I had so much fun reading this book. Who knew Croc's were so seductive.

If you'd like to read this book for yourself, you can find it here.