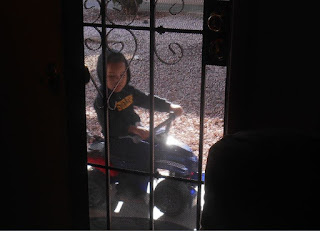 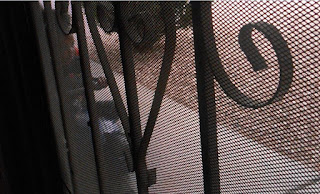 My awful neighbors in 2 different apartments not only have very loud obnoxious fights but they don't watch their kids. This child in the video is about 4 years old and he's outside by himself all the time. The kid in the picture is about 2 years old and is also out by himself all the time. There are 5 kids in total between the two apartments and they all like to stand or sit directly in front of my door and yell or bark at Falcor. Or like in the second picture they'll park their ride on car right beside my door and start barking trying to get my dog to bark at them.

They bang on my door, yell into my apartment and bark at my dog. This time he sat on his bike right in front of my door trying to get my dog to bark until I told him once again to get away from my door. I've asked his parents to keep him away from my door but they don't care so I've started documenting what I'm having to deal with. I took this video about 3 months ago when the weather was still nice enough for me to have the door open and every day that I had the door open the kids would do this or do what other videos have shown and just stand in front of my door and tease my dog. 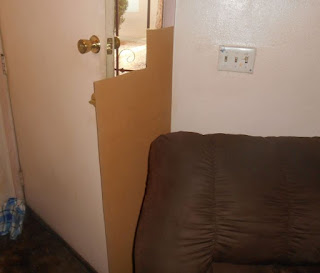 So this is what we've had to do now to keep the kids from seeing in and teasing my dog and to keep Falcor from seeing the kids and barking at them. It's a thin piece of plywood that we just prop up against the door. So far it works for the most part but a couple of the kids have started running up to my door and yelling or barking. I went and asked their parents to keep them away from my door and they gave me the same excuse they always do, "Oh sorry, I didn't know." Yeah well you would have if you'd been watching your damn kid.

I took the video and picture back in March so by now it's warm enough that we keep the door shut but for months we dealt with the kids doing this. Oh and one of the neighbors with 2 of the kids got kicked out because everyone was complaining about all the fights they were having. So now we only have to deal with 1 neighbor and their 3 kids.