On Monday the police pulled up really fast in front of this car that's in this driveway across the street. They told them to get out with their hands up one at a time and they handcuffed them.

I know the pictures aren't great because they were taken out of my bedroom window but you can see the police, police car and the guys getting handcuffed.

As this was happening the people in that courtyard started coming out giving the police a hard time but the police yelled at them to go back in their apartment's but they refused. I'm surprised that these people weren't arrested for refusing to go back inside.

But only these two guys were arrested.

The police searched the car they were in and put stuff in a paper bag and took it with them when they left with the two men. 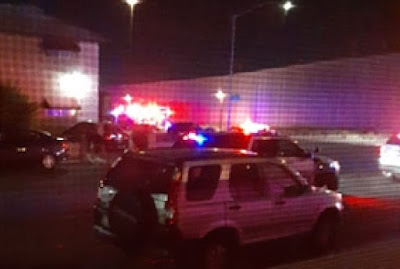 It was Midnight on Sunday and there were 3 police cars out there along with a fire truck. They were there for about an hour. The whole time they had their lights on which are really bright and it was shining in my bedroom. Hard to sleep when there are bright lights in the room.

Ken is home and doing well. The physical therapy people are coming and working with him to get his left side working right again. We have an appointment with the Oncologist in 2 weeks so we should know more then. My daughter however went back in the hospital Monday evening because she had another asthma attack and had a really hard time breathing. They found that her hemoglobin levels were really low and had to give her a blood transfusion. But she's now back home with a new inhaler that seems to be working well.

So that's it for this week's Apartment Hell  Life! Be sure to come back next week for more.
Posted by Mary Kirkland at 12:00 AM 63 comments