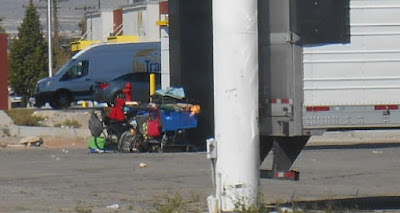 There are about 6 homeless people that are constantly at the drug dealers apartment in my courtyard. During the day they set up camp with their cart, chairs, blue tarp and signs right near the McDonald's or Del Taco. This day they were parked directly behind one of the 4 wheeler trucks that was parked in the parking lot. But with the Coronavirus outbreaks and social distancing taking place right now, my apartment manager posted a letter on the office door that the office will be closed until further notice and no manager will be on property until further notice.

Well these homeless people decided to break into the old maintenance shop that's right around the corner from my apartment. My daughter saw it busted open first and later when I walked by it was wide open and there were two mattresses on the floor. Wednesday night I saw a couple of them pulling their carts in with them and shutting the door. There's nothing in the old shop which is why it was nailed shut. There's an email we can use if we have emergency maintenance problems but I was having a problem setting up my resident portal so I could pay my rent online and they never responded to my email. But I got it figured out. I'm not saying a thing to them about the people in the shop. They should have had someone on property to make sure things like this didn't happen. I'm a little irritated and just can't bring myself to give two sh!ts about it. 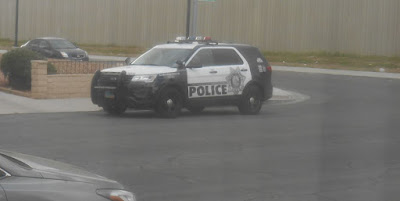 Then I saw a police car across the street. I have no idea what went on since I'm not getting close enough to anyone to find out. lol 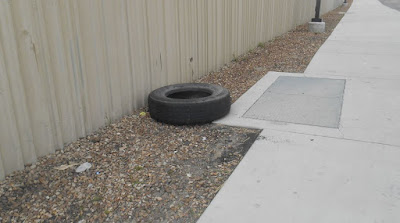 On my walk with Falcor, I saw that someone had deposited a used tire in the rocks. How does that happen. They pulled over right here, put a spare on and left the flat here? Who knows but I wasn't expecting to see an old tire right here. 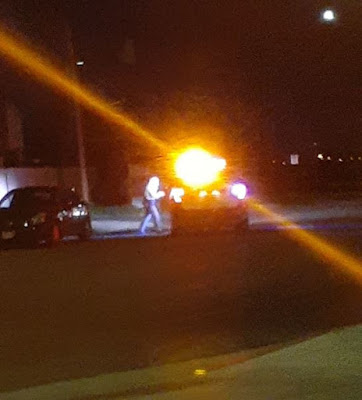 I didn't get this picture posted in time last week since the police showed up twice late Saturday night last week. The police helicopter was up as well. The police were in this spot twice, 4 police cars in all and arrested 2 different people. My daughter took this picture with her new phone but it came out blurry too. 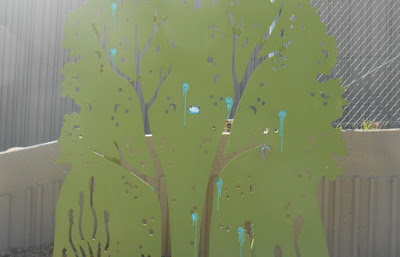 I woke Ken up at 3am on Tuesday because I heard something weird like far off gunshots. He assured me it wasn't gunshots. So when I go out this morning with the dog...paintball platters all over the metal tree, rocks and wall right next to our apartment complex. Now I know what that noise was. Paintball gun. 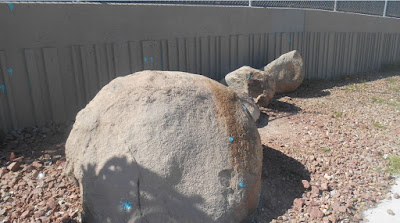 I hope no one was outside when they did this. They might have gotten hit too.

Tuesday morning my daughter went to the ER for a severe asthma attack. Later that day I had to call 911 for Ken when he had a seizure. My daughter came back home Friday night and is ok now.

Ken is still in the hospital. You might have seen my post a few days ago about all of this. Well as of today they told Ken that he has Metastic brain cancer. Meaning the cancer started somewhere else, most likely the lungs and has traveled to other parts of his body including his brain. They are still testing to see where the cancer is but it looks like it's all over. They haven't discussed any treatment options yet so it's just wait and one day at a time for now.