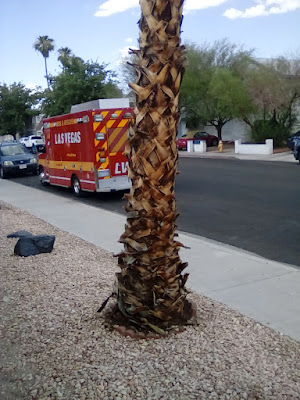 I was out walking Falcor in front of my apartment complex and saw this ambulance pull up. I thought they were going to the pool courtyard which is one down from mine but nope, they walked into my courtyard and went to the new move in. They stayed for a few minutes and then left. He's a really quiet guy and he works from home so I hardly ever see him outside. Hopefully he's alright. 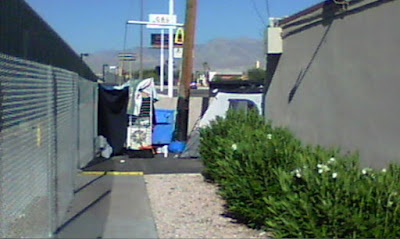 It's kinda hard to see but there's a tent set up down by the blue trash can just to the right of it. And to the left of the trash can there was a huge metal shelving unit with a bunch of blankets pulled across the opening of the fence that I walk through to take Falcor for a walk. One of the homeless guys had all his stuff set up out there in the alley right behind someone's bedroom window. Someone must have called the police because I saw the Sheriffs car pull up next to him and make him pack all his stuff up and leave. 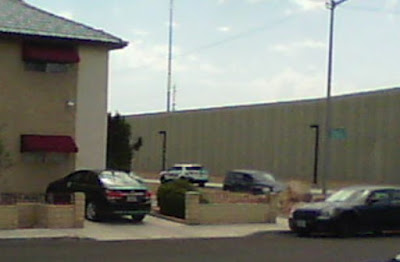 That white car in the Middle is the Sheriffs car when he drove away. 2 days later the homeless guy was right back in the same spot. I feel bad for the guy but he needs to find a better spot to set up his tent. He was taking up one of the parking spaces and was right in front of someone's bedroom window. Plus he blacked everyone from using the hole in the fence that most people use to get into the grocery store's parking lot when they walk over there or like me when I walk the dog.
A few days later the homeless guy had moved his sleeping bad to in between two of the bushes in the pictures above. I was walking by after the sun had gone down and he was eating something but all I heard was him very loudly making nom nom noises and loudly saying "MMMmmm munch munch munch" The people in drug dealers apartment feed him and that's where he gets his drugs which is why he sticks around here. Not gonna lie, he scared the bejuju's outta me when he made that noise because it was dark, his sleeping bag is black and I didn't see him until he made noise.
The high this week was 112F/44C
The low this week was 84F/28C
So that's it for this week's Apartment Hell  Life! Be sure to come back next week for more.
Posted by Mary Kirkland at 12:00 AM 53 comments