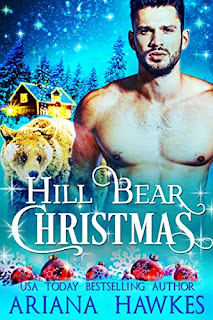 Book Description
A gutsy B&B owner with a ski-resort-sized problem. A single father and his children who never celebrate Christmas. Together, can they bring the magic of Christmas to their hometown?
Grace Jensen has been working hard to prepare the small log cabin business she runs with her mother for the most exciting time of the year – Christmas. She loves her job, and it keeps her thoughts away from her divorce.
But when a flashy ski resort opens nearby, and starts stealing local business, the holiday season suddenly looks bleak, not just for Grace and her mother, but for everyone in Powderwood. Grace is determined to not give up without a fight, and when she meets Alec, a shifter from the famous Hill Bear clan, she finds a partner in crime. Too bad that he’s a rugged bear god, with the kindest heart she’s ever known. She’s still hurting from the past and just wants to get through Christmas in one piece.
Alec Hill and his clan don’t celebrate Christmas, which is lucky, since the new ski resort that’s been built beside their ancestral territory is turning December into a miserable month. When he discovers that the humans of nearby Powderwood are also suffering—particularly a small, cheerful, feisty one named Grace—he can’t help but get involved. Nothing to do with the fact that his kids love her, or that her sparkling blue eyes and courageous spirit get his bear roaring. He’s sworn off finding a second mate.
Grace is full of festive ideas that might just help both communities save their livelihoods—but they also have the effect of bringing her and Alec closer and closer. As she teaches his kids what the holiday season is about, will a Powderwood Christmas be second-time lucky for Grace and her big, growly bear? A standalone Christmas story, full of all the romance, magic and warmth of the festive season!
My Review
Grace runs a B&B with her mother and things were working out well until a huge ski resort bought up land near the town, cutting off the magnificent view of the mountains to all but those who stay at the ski resort. She and her mother can't compete with the brand new resort and their lavish rooms. But they have to find a way so they can pay their bills.
Alex is a bear shifter and doesn't like the new ski resort either. His wife died five years before and he is raising two small kids by himself. He's doing alright and doesn't want a new relationship since he thinks he won't find another mate. That is until he runs into Grace and she's great with his kids. The funny thing is they run into each other a couple of times and it's easy to see she's great with kids and the kids like her.
Seeing these two flirting a little and how they both are attracted to each other but neither will make the first move was so sweet. But of course there's a misunderstanding and he pulls back but when Grace needs help, she calls Alex and he comes running. Watching them try and fight the pull they feel for each other was a little sad but then I knew it wouldn't be forever so it was fun to see them finally fall for each other.
I think we got a small glimpse of who will have the next book and I can't wait.
I give this book 5 out of 5 stars.
Amazon
Posted by Mary Kirkland at 12:00 AM 24 comments