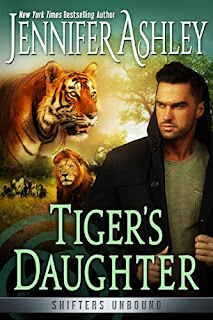 Book Description
The mate bond has never been this strong ...
Connor Morrissey hits his Transition—hard—and Shiftertown braces for chaos. His transformation into a fully adult Shifter comes early and is lightning fast, heightened by Connor’s very special heritage. Connor spirals out of control, ready to fight for his place in the hierarchy, and his instincts tell him his place is very high.
Only the touch of Tiger-girl cuts across Connor’s pain ...
She’s there for him, beautiful, powerful, but a fish out of water, struggling to makes sense of the real world. As Tiger’s daughter, she’s more than an ordinary Shifter, inheriting Tiger’s strength and intelligence in addition to the enhancements the Shifter Bureau black ops team made to her in secret.
Then Connor is captured by those who will use him to enhance their own power. Tiger-girl knows the mate bond is forming between them—losing Connor will tear her apart. But can she risk being found by the man who wants to turn Tiger-girl into the most deadly Shifter of all time?
Now Tiger-girl must choose between her safety or exposing her whereabouts to free him ...
My Review
Connor Morrissey is going through his transition too soon. He's a lion shifter and the transition from cub to full grown adult lion shifter is hard. He feels out of control until Tiger-girl's touch calms him enough not to be completely out of control. Tiger-girl is Connor's mate but he tries to fight the pull towards her because he's afraid of his strength and doesn't want to hurt her. But she's not afraid of him.
When Connor is kidnapped she goes along because she can do nothing else as his mate. Their family takes action when they realize what's happened and rescues them but now they know something fishy is going on. When danger comes for them again, they have each other to lean on but a new danger appears and a new storyline is unveiled in this series. I'm completely excited to see where this will go in the next books.
I was on the edge of my seat when the backstory of Connor and Tiger-girls mom's were revealed. The gifts they both inherited from their mother's as well as Connor from his father's side was mind blowing and I don't use that phrase lightly. They both come out of this stronger and the series just got even more exciting. I've been reading this series for years and the books and storyline just gets better and better. You have to read this series if you like shifters, wonderful world building and great storylines.
I give this book 5 out of 5 stars.
Amazon
Posted by Mary Kirkland at 12:00 AM 34 comments