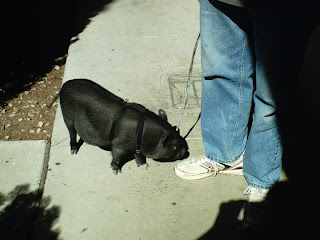 My brother had a pot bellied pig and he was able to leash train his pig by starting out when he was young and letting him get used to the harness being on him. When my brother brought Wilbur over, he didn't mind the harness or the leash at all because he was used to it. 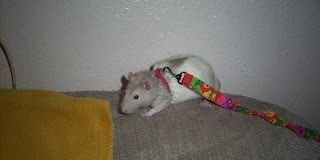 This was my sweet Dusty. I had him and his brother Oreo back in 2008 and while Dusty didn't mind having the harness on him and the leash, Oreo wanted nothing at all to do with either of them. I was able to put the harness on Dusty and take him for walks outside, which freaked out several people in my apartment complex. lol

I started out letting him see, smell, and play with the harness. After a few days I slipped the first loop over his head and let him get used to me putting it on and taking it off. After a few times he didn't care and didn't try to stop me from  putting it over his head and I was able to get the second loop around his body. Then I would give him a treat like a yogie and after he ate it I would let him walk around on the couch, the floor or on me with the harness on. After a couple of days I attached the leash to it and let him walk on the floor which he loved.

Then I took him outside for a couple of minutes and he loved it. He was sniffing everything and didn't seem scared at all. If he had seemed scared by trying to crawl up my leg, or get out of the harness, I would have taken him back inside. But he was happy to sniff the grass, the tree's, and get a pet from a few people who he came across. Of course I ONLY took him outside for a walk when the temperatures were cool. The sidewalk was not hot or even warmer than warm because I didn't want the heat to hurt or burn his tiny paws.

He had a lot of fun but Dusty was the only rat I've ever had that let me put the harness on him and take him for a walk. You can't force an animal like a rat to do something they really don't want to, that's not fair to them.

Oh and if you're wondering what type of harness I got for my rat, it's this one.
Ferret Harness
Posted by Mary Kirkland at 12:00 AM 4 comments