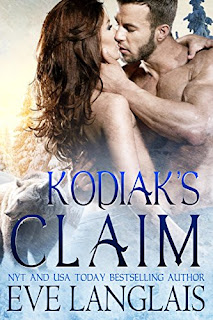 He might growl, but she’s not afraid to bite.

Hands full taking care of his clan, the last thing this Kodiak bear needs is a woman poking her cute little nose into his affairs. But when she refuses to back down—and shows the courage to stand up to him—he can’t resist the allure of a curvy city girl.

She’s mine. All mine.

And when a rival clan thinks to use her to force his paw, he’ll show them why you never piss off a Kodiak, or threaten what’s his.

Tammy is convinced all men are scum, even gorgeous ones like Reid Carver. She knows he’s hiding something. Something big. She just never expected a real freaking bear hid underneath all those yummy muscles. But when the truth comes out and he tries to scare her off with a roar, she shows him not just bears have bite.

Reid runs a shipping business but his trucks are going missing so when Tammy from the insurance company comes to investigate his claim, he's not expecting to feel instantly attracted to her.

Tammy got rid of her cheating boyfriend who put her down because of her weight. Now she's investigating an insurance claim when she meets Reid and his grandmother.

At first Tammy finds Reid to be big and intimidating but staying in his house with him and his grandmother has its advantages. She ends up seeing a lot of him and getting to know him better and he can't seem to stop flirting with her. Things are going well between them when she see's him change from bear to man and back again. Reid and his people are all shifters and now Tammy knows about it. Frankly she takes it better than I thought she would under the circumstances.

Reid fights his attraction for Tammy because he knows that being the alpha of his people means he should mate with a shifter but the connection he feels for her is intense and when she leaves and ends up missing, the bear in him really comes out.

This was so much fun and I really liked the twists that happen at the end of this book. These two fight their attraction at first but then they admit that it's more than just attraction. Some of the scenes between these two made me laugh out loud because they were so funny at times. I love Eve Langlais and will continue to read hr books.