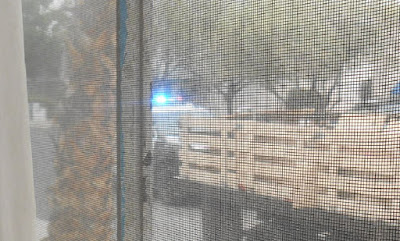 I'm sure you remember a couple of weeks ago I told you about Jessica and Mikey who were using this abandoned truck as their home/drug den. I called the constables office and reported an abandoned vehicle and waited for them to do something. Well, they finally did! My daughter spotted the police outside checking out the truck and then he waited there for the tow truck to show up. 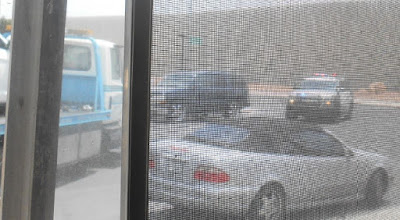 The officer then pulled around to the other side of the street so the tow truck could hook the truck up.

The tow truck already had a car on it so he just hooked the front tires to the pulley thingie *Yes, I'm aware that's not what it's called*  and pulled the truck behind his tow truck.
I didn't see Mikey or Jessica anywhere around when it was towed away but I bet they were surprised when they came out looking for it. I'm just so glad the truck is finally gone. You have no idea how many shouting matches right outside my window I've heard at 3am from these two idiots.
----
I told you guys that the old shop got a security door a couple of weeks ago. So last Sunday I see married guy and cordless drill woman breaking in again. They got through the security door with some tools. Then later that day I watched them both come out of the old shop. Guess they still have a place for their dirty little sexy times.
So that's it for this week's Apartment Hell  Life! Be sure to come back next week for more.
Posted by Mary Kirkland at 12:00 AM 61 comments