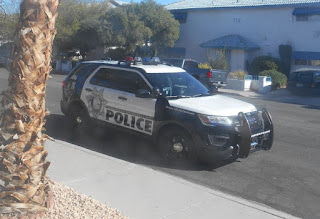 I hadn't heard anything outside but I look out my bedroom window every so often and just happened to see this police car right in front of my window. I don't know why I find it so funny that they will park right here so often. But it makes it easy for me to get a picture.
And it was for my courtyard this time. The police were at drug dealer's apartment again. They banged on the door for a few minutes before anyone opened the door. They were probably hiding all the drugs. The police talked through the screen door for a few minutes and then went inside the apartment where they stayed for about 30 minutes. I thought for sure someone was going to go to jail but the police came out and left. Unbelievable.
----
Another neighbor moved out this week. That makes 3 vacant apartments in my courtyard. So now there's 3 chances that we'll get some noisy, obnoxious neighbors. My daughter was talking to this lady the night before she moved out and she offered my daughter and her boyfriend who were sitting outside, a shot of tequila or a beer but she said she couldn't drink with them because she's on a lifetime probation. She said she spent 13 years in prison and is now on probation for the rest of her life. I was really surprised because she's so nice, quiet and never has anything going on at her place. She must have done something major for that kind of sentence and probation.
--- 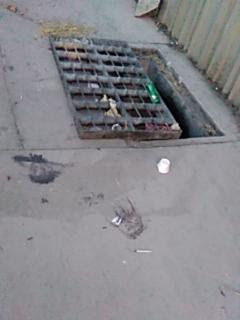 This heavy metal grate covers the storm drain pipe. The pipes are anywhere from 3 to 5 feet in diameter and they lead to the sewer. I took this picture after I watched one of the homeless people leave drug dealer's apartment, walk over to the metal grate, pry it part way off because it's heavy and then jump down into the hole which is a couple of feet down and scurry into the large drain pipe. Dude must have thought he was a Teenage Mutant Ninja Turtle. Master Splinter will be very upset at the uninvited house guest.
I know some of these pipes are even bigger in diameter because my husband, daughter and my daughter's friends used to take flashlights when they washes and drain pipes around here were being dug and installed and would walk for miles through them. There's quite a few people that live down in the sewer too. They have to be careful during monsoon season because the rain water will rush through the washes and drag anyone down there along with it. It's not safe. 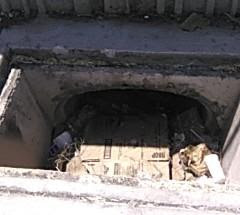 I watched someone pull the grate completely off the other day and also go down the storm drain pipe. It's really hot so maybe that's why they are taking shelter down there. I took this picture so you can get a better idea how big the pipe is.
---
I was outside with Falcor one day and the FedEx delivery guy came in my courtyard with a package for the apartment directly across from drug dealer's apartment. The wife came running out screaming at the FedEx guy asking if that package was for her. He said no and she chased the guy right past me screaming at him that she has a package too. He told her he didn't have a package for her, jumped in his truck and drove off. She came walking back past me saying that the package was probably for her. It was a long skinny package so I asked her if she was expecting something long and skinny. She said no, but it's probably for me. I stood outside watching her because she was just standing at her door looking at the package and I knew she was going to steal it but not with me standing there watching her. But her plans were foiled when yet another delivery man came to the other door with another package but this guy stood at the door knocking until they answered so they got both their packages. She looked pissed about it too. She went back into her apartment and slammed the screen door.
---
The high this week was 109F/42C
The low this week was 72F/22C
So that's it for this week's Apartment Hell  Life! Be sure to come back next week for more.
Posted by Mary Kirkland at 12:00 AM 44 comments