I heard a couple of people running through the rocks in my courtyard. I get up to look and the cops are chasing a guy down the middle of my courtyard and so I go tell Ken. He gets to the door and the cops chase another guy right past our door and quickly get him down on the ground at gunpoint. Then the police helicopter starts flying around shining the light on our apartment complex. All of the sudden there are 20 cops and half a dozen cop cars on the street. The police were in our courtyard, the courtyard across the street, in the alley...they were everywhere.

I only got a couple of pictures before the police were yelling at everyone to get back inside. I didn't want to get arrested so I took my happy ass back inside. lol 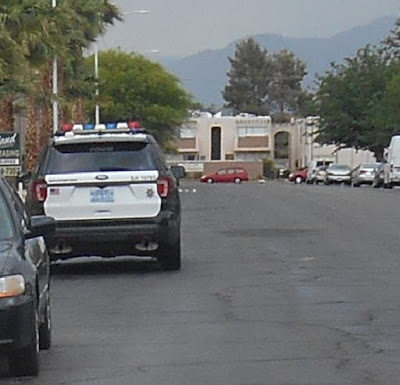 Turns out they were down the street for a burglary call and the first guy they chased was seen at the burglary according to his sister the next day. The second guy they chased wasn't involved at all but it's a felony to run from the police when they tell you to stop so he was arrested also and they impounded his car. The first guys sister wouldn't let the cops search her apartment so the police made her handcuffed brother sit in front of their door for almost 4 hours until they could get a search warrant. In all, 3 people went to jail. The sister lived in my courtyard which is why he ran through here.

Ken went out walking the dog a couple of times while all this was going on and saw our apartment manager who was drunk and mouthing off about how the second guy that ran (she was dating him even though she's married to a guy in prison) didn't do anything wrong because he had been at home with her. But Ken told her that he saw his dumb ass run from the police which is a felony. She was too drunk to get it.