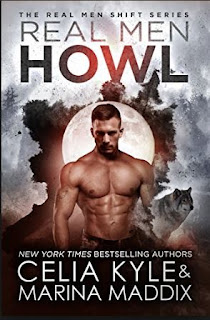 Lucy Morgan left Ashtown, Georgia, ten years ago and planned to never return. Unfortunately, life didn’t get that memo. She’s back and now painful memories follow her everywhere. Until she meets him. Mason Blackwood is over six feet of sinfully gorgeous man who—for some reason—wants her. He also thinks he’s a werewolf so… yeah. He’s crazypants. But when he wants to have his wicked way with her, his sanity doesn’t seem all that important anymore.

Mason isn’t sure how much longer he can remain Alpha over the Blackwood pack. Without a mate to balance him, his wolf snatches more control every day. It won’t be long before he loses himself to the animal entirely. Then he meets Lucy—a sassy, curvaceous beauty who calms his beast with a smile. One sniff is enough to tell him she’s his mate, and nothing will keep them apart.

Not even the pack’s deadliest enemy who’s determined to kill Lucy before Mason can claim her.

Mason was quickly losing control and was slowly going feral. If he turned feral his pack would have no choice but to kill him. The only thing that stood between him and death was a mate, if only he could find her. So when Mason meets Lucy, he knows he can't let her go but she just thinks he's bossy and irritating.

Lucy moved back to her home town after being gone for ten years. She'd left after she'd witnessed her parents murder and it still haunted her. Lucy is accidentally hurt and goes to her childhood home to recover. She's not expecting Mason to show up at her door to make sure she's alright. She's instantly attracted to him but assures him she's fine and shuts the door in his face. He's stunned because women usually fall at his feet, but not this time which amuses him a little.

Lucy is awesome! Omg this woman is all snark, snarl and verbal jabs. She's clever, smart and funny. I loved her character so much. At first she does not like how alpha Mason is or how bossy he seems and she lets him know... all the time. It was hilarious because he's not used to anyone talking to him like that. He's not used to a female not giving into his charm and good looks right away either and Lucy resists him at every turn.

Watching these two get to know one another and slowly realize that Lucy is quickly falling for Mason as much as Mason has already fallen for her was a lot of fun. There's also an enemy causing problems for Mason's pack which turns into a huge twist towards the end but it fit so well in this story. I love a good curve ball when done well and this was.

Mason's pack mates are very welcoming, so nice and everyone is so happy that Mason found his mate and not just because not finding her would have meant a death sentence for him. The best secondary characters were definitely Charlie and Ghost. I really liked how rambunctious the kids or pups were and Ghost the cat was a great addition to the story.

I had a good time with this book and Lucy had me smiling more times than I can count.