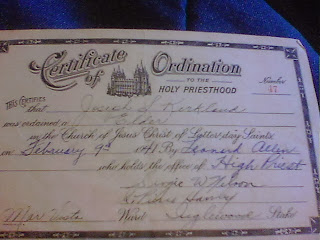 *Click on pictures to enlarge them*
I was cleaning out my closets the other day and found some pretty cool junk. I keep things for a reason and I have no intentions of getting rid of any of this "junk". So what most of you don't know is my dad's whole side of the family are Mormon's. My dad gave me some genealogy paperwork he had in a box and along with those papers were these things. This paper is from Feb. 9th 1941. It's the certification my grandfather received when he became an Elder in the Mormon church. 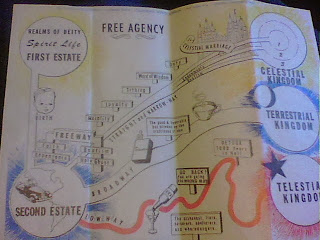 There was also this, what I am guessing is some sort of mormon map as to how to get into heaven. The top path is the Freeway "The right way" that they think every mormon should be taking to get into heaven. Along the bottom of the road it says, "The straight and narrow way"

The second path is "Broadway" and it has pictures of cigarettes and what I believe to be coffee, which are both no no's. And the little sign on that path says, " The good & honorable but blinded by the craftiness of men."

The last path, highlighted in red is the "low way" and on that path there is a wine bottle and wine glass and a sign that reads, "Go back, you are going the wrong way!" and right after that sign is another sign... 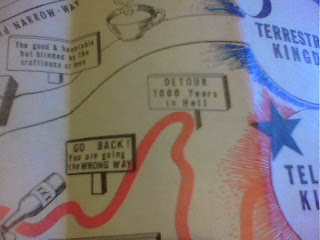 That says, "Detour 1000 years in hell" Wow, that's kinda harsh for having a few drinks, don't ya think? 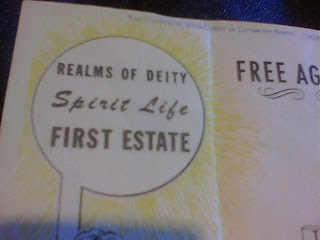 I don't see a year on this map but it's safe to say that it's old. Everything that was in the box my dad gave me hasn't been looked at in years and most of it belonged to my dad's parents. I wonder if the Mormon's still hand out maps like this? 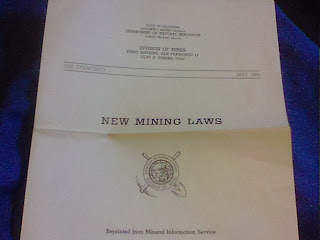 Then I found this little gem in the same box. It's The New Mining laws... 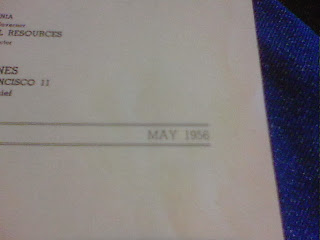 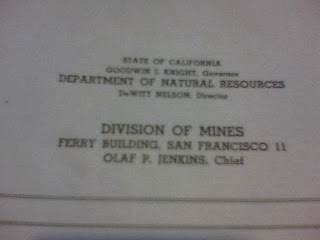 The little booklet is only about 6 pages long but I found it to be really interesting and it's awesome that it's so old.
Posted by Mary Kirkland at 12:00 AM 7 comments