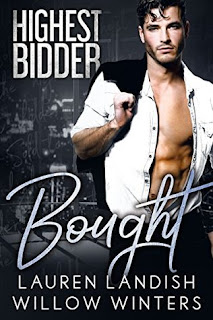 Everything has a price … and I’m willing to pay.
I trust no one. I thrive with control and I’ve learned to be ruthless and coldhearted. A love life? I’m not interested.

But I still have desires.

That’s where Dahlia came in; my treasure. She had never been a submissive before and I was eager to train her.

The dusting of sparkles on her dress barely hid her tempting curves. I wanted to see all of her. My d*ck was already hard at the thought of my hand leaving a bright red print across her lush ass.

When I saw her on stage at the auction, dressed in gold, I knew I had to have her.

She’s mine for an entire month. I own her. But one lie changed everything.

She’s going to be punished for it. But I’m doing this for her own good. She needs this.

If it’s the last thing I do.

Another thing that bothered me was that Lucian was so cold emotionally. Sure some of the time he showed Dahlia with his words that he cared but some of his actions at the same time didn't make what he was saying very believable. He came off as cold, wounded because of his ex wife and emotionally detached.

The other thing that bothered me was the fact that the BDSM club held the auction and the submissives would get paid, quite a lot at the end of their contract. But only if they did what the Dom's wanted them too. In the contract it stated that if the submissives didn't live up to their ends of the deal, they wouldn't get the money. To me that sounded like a sub would bend over backwards to make sure the Dom was happy even if that meant doing something they didn't want to do in order to get the money at the end of the contract. Plus wouldn't it be illegal for an exchange of money to be taking place for sex?

That's the other thing I had a problem with. By the end of the book it's pretty obvious that Lucian is used to getting whatever he wants, even if that thing happens to be completely illegal. What he did in the name of justice for Dahlia actually shocked me and while I can understand wanting to do that, it's not alright.

I had high hopes for this book and almost didn't finish it but I pushed through and read it until the end but I can't recommend this one.