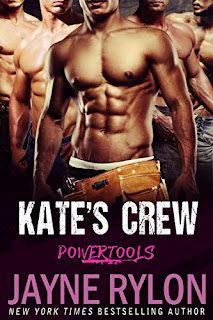 Sultry summer heat has nothing on the five-man crew renovating the house next door. No one could blame Kate for leaning out the window for a better view of the manscape. The nasty fall that follows isn’t part of her fantasy—but the man who saves her from splattering the sidewalk is definitely the star.

When Mike personally attends to her injuries, she realizes her white knight in a hard hat has a tender side, giving her no choice but to surrender to the lust that’s been arcing between them since day one. In the aftermath of the best sex of her life, she whispers her most secret desire: to be ravaged by his crew.

Warning: This book may cause you to spontaneously combust as five hot guys bring a woman’s wildest fantasies to life during one blazing summer affair.

Kate was painting in her place while ogling the guys next door who were working on their place. As she was ogling Mike, her balance tipped on the ladder and she fell all the while Mike was watching. He ran, and jumped to catch her from falling off her roof and the other four guys ran over to congratulate him and see if Kate was alright. She hurt her leg so Mike took her to the hospital and found out that she wasn't hurt more than a few bumps and bruises.

Mike and Kate can't stop their attraction for each other and end up in bed but Kate tells him that she doesn't want a relationship so when he presses her on why she tells him that she wants the other 4 guys on his crew as well. After Mike hears her confession he has a confession himself...they all want her too. After that this story is all about whether or not she'll take them up on their offer to share her for a night ad what happens when she makes her decision. I have to say that I wasn't sure I would like this book but I think the romance and love scenes were done really well. I like the romance between Mike and Kate and how accepting and open minded all the guys are. This turned out to be a better story than I first expected it to be. All the guys are fun, open and good friends with each other which made it fun to watch them have a good time together.