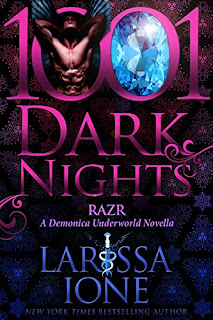 Book Description
A fallen angel with a secret.
An otherworldly elf with an insatiable hunger she doesn't understand.
An enchanted gem.
Meet mortal enemies Razr and Jedda...and the priceless diamond that threatens to destroy them both even as it bonds them together with sizzling passion.
Welcome back to the Demonica Underworld, where enemies find love...if they're strong enough to survive.
My Review
Razr is an angel who was cast from heaven to work for Azagoth in hell until he can find at least one of the gemstones that he lost when his charge was killed. And while he's looking for the gemstone he also gets *punished* every so often with 6 lashes from someone in hell who does not hold back. The harsher the punishment, the longer he can go without getting another one.
Jedda is an Elf and has an affinity for gemstones and can find just about any of them. But she has a huge secret. So when Razr tracks her down and wants her to find at least one of the gemstones he's looking for that will get him back into heaven, she knows she can't give them to him but it takes a while for the *why* to come out.
Watching Razr go through these punishments all the time because the effects don't last very long, was really rough. It's probably my least favorite part of this book because it was brutal. He passes out so many times from the pain but because he's an angel he heals incredibly fast.
When Razr explains what the gemstones are and how he lost them, it was shocking to find out how Jedda was connected to the entire scenario. I wasn't sure how they were going to get through that but the fact that Razr was willing to just go about life as he had been to make sure she was safe melted my heart a bit. So I was happy to see how this book ended because it was great. If you've been reading this series you will want to read this novella as well. It was a great addition to the series.
I give this book 4 out of 5 stars.
Amazon
Posted by Mary Kirkland at 12:00 AM 30 comments