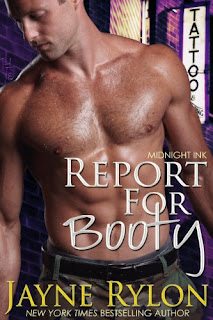 When Burke Levine got marching orders, he couldn't bear to make his girlfriend Chavon a military widow. Years later, discovering his name tattooed on her perfect ass via a New Orleans artist’s portfolio confirms his epic mistake. Will Midnight Ink’s New Year’s Eve party grant them a second chance?

This was a very quick novella that starts out with Burke breaking up with Chavon before he heads off to war. He didn't want to make her wait around for him or make her a military widow so this was his ridiculous way of saving her the heartache if something happened to him. Chavon packs up right after the break up and moves away, not leaving a forwarding address. So when he comes looking for her later, she's just gone and he has no way of getting a hold of her.

Years later he has decided to get a tattoo and while looking at the portfolio of the tattoo artist he discovers his name was tattooed on a woman's backside. The tattoo artist can hardly believe that both people unknowingly came to him at different times for tattoos but he agrees to pass along Burke's info to Chavon and it's up to her what she wants to do with it.

I do like a second chance romance and while this didn't have much story to it, I did enjoy how the story unfolded and the ending was great.