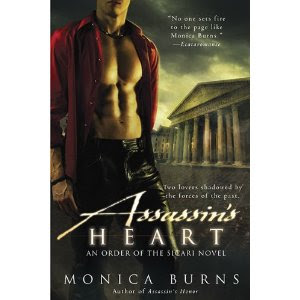 
From the back cover..

The truth of the soul.
Lysander Condellaire never understood why he had telepathic and telekinetic powers until the night his Praetorian father tortured him and left him for dead. Now, the half-angelic, half-demonic face he sees in the mirror is a reminder of the monster he must keep hidden or face expulsion from the order of assassins know as the Sicari. But his dreams of Ancient Rome hint at a destiny he finds hard to accept, especially when it involves the woman he loves, but can never have.

The consequences of desire.
A gifted healer in the Order, Phaedra DeLuca witnessed her mother’s murder when she was just a little girl. The haunting memory makes her loathe everything Praetorian. When she travels to Rome in search of an ancient artifact, she must work alongside a man who once cruelly rejected her love and healing touch. But her dreams of Ancient Rome tell of an irreversible and possibly dangerous future. For the distant past and present are about to collide--with the one man she is destined to love.

My review...
I read a lot and read this book in one sitting! I just couldn't put it down after I started reading, I was so enthralled. The story that Ms. Burns weaves together was one of tragedy, torture, sorrow, adventure and love. Anyone who likes paranormal romance is going to love this book. I just read Assassin's Honor the day before reading this book and couldn't wait to see what Ms. Burns had in store for us.

Lysander's story is so tragic and sad it made me want to cry for all he's had to endure. He was tortured by the Praetorians and they sliced off part of his face, but later we find out he has even more to endure and it seems like it might be too much for him. He has secret's and he's sure that if anyone finds out about them they won't trust him or love him.

Phaedra is a healer for the Sicari and she's been in love with Lysander for over a year, but he's keeping her at arm's length because he doesn't trust her to love him if she ever finds out his secret. They both have to get past the hurt of the past year when they are thrown together much to the dismay of Lysander, when they go in search of The Tyet of Isis. An ancient artifact they want to get before the Praetorian's get their hands on it.

Neither Phaedra or Lysander know that the other have been having dreams of the first Sicari lord and his wife and we get pulled into another heart breaking story as their dreams get more vivid and we find out they are dreaming about their own past lives.

As well as the past life story there is a romance story from other characters in this book that comes alive in a shocking way. Atia the Prima Consul and Marcus a Sicari Lord have a secret past and Atia has been keeping a huge secret from Marcus as he is about to find out. Their history and romance that barely conceals itself under the surface is sure to explode in the coming books from Ms. Burns. I liked this second book in the Order of the Sicari series even more than the first one if that's even possible. I think this series can only get better and more exciting as time goes by and we read stories about the rest of the characters.

This story within a story could have been so confusing if a less talented author had tried to write it, but Ms. Burns is incredibly talented and has found a way to bring a whole new world to the paranormal genre that fans are going to be talking about for years. 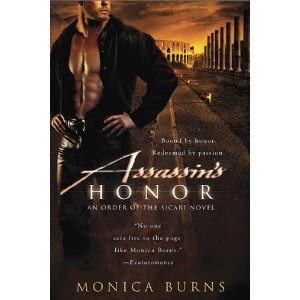 
From the back cover..

A woman with visions of the past...

Archeologist Emma Zale sees the past when she touches ancient relics. It’s how she uncovered evidence of an ancient order of assassins—the Sicari. When a sinfully dark stranger shows up on her Chicago doorstep demanding an ancient artifact she doesn’t have, he drags her into a world where telekinesis and empaths are the norm. Now someone wants her dead, and her only hope of survival is an assassin who’s every bit as dangerous to her body as he is to her heart.

Bonded to an honorable assassin...

Ares De Luca comes from an ancient Roman bloodline of telekinetic assassins. A Sicari, he’s honor bound to kill only in the name of justice. But when the woman he loved was murdered, Ares broke the Sicari code and used his sword for revenge. Love cost him dearly once before, and he’s not willing to pay the price again. At least not until hot, sweet, delectable Emma walked into his life. Not only does she hold the key to a valuable Sicari relic, she might just hold the key to his heart.

Their dangerous passion will redeem an assassin's honor...

Emma is an archeologist and on a dig near Cairo when she once again must face a murder to someone close to her. The first murder she had to endure was that of her parents. But before her father is killed he leaves a coded message for her and she finds it right before someone tries to kill her. That's when a Sicari named Ares DeLuca tries to help her by telling her she needs to go into hiding because her life is in danger. But of course she isn't wanting to give up her whole life and Ares friends, the other Sicari are less than friendly to her when she first meets them because she is an outsider.

So many things happen while Ares is hiding her and we get to meet some of the other characters in the world of the Sicari. Including the bad guys, the Praetorians who want all the Sicari dead.
Monica Burns has made up a whole new world of hot heroes with smoldering eyes and telekenic powers. It's easy to tell that this new world took a lot of thought and time to make because it's incredibly believable. She even gives us a lesson in her own cross between a Latin and Italian language that the men seem to love to speak throughout the story. I even learned a few cuss words, even though I don't know exactly what they mean yet.

While reading this book I got a pretty good lesson in the Sicari way of doing things and their customs, while some of them may seem barbaric at first I understood why they are needed and why honor is so important to them by the end of the book.

I can't wait for more books in this series.
Posted by Mary Kirkland at 12:55 PM 0 comments

Well, I'm finally back and this time for good...I hope. My daughter's boyfriend took parts from a couple of different computers and made me a new tower. He said my motherboard was fried and that's why my computer stopped working.

Because it's made up of parts from several different computers...get it...frankenstein...lol

See you in the ethers..
Posted by Mary Kirkland at 1:05 AM 0 comments