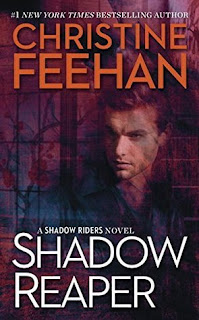 #1 New York Times bestselling author Christine Feehan returns to her scorching-hot series starring a Chicago crime family that has built its empire in the shadows...

Billionaire playboy Ricco Ferraro knows no other life. Being a shadow rider is in his blood—but so is a haunting desperation stemming from the secrets of his dark past. His recklessness puts not only his life at risk, but also the future of his entire family. To save them all, he must find a woman who can meet his every desire with a heat all her own...

Just when Ricco has given up hope, he meets her—a mysterious woman whose shadow connects with his. She’s someone looking for a safe haven from the danger that has stalked her over the last several months. In Ricco’s embrace, she finds one. But the darkness in which they so often find sanctuary can also consume them...

Ricco and his five siblings are shadow riders, meaning they are able to turn into shadows and quickly move anywhere shadows are. Ricco hasn't been the same since he was sent for training in Japan when he was 14 years old and had some awful things happen to him. While he might not be suicidal, he hardly cares if he lives or dies these days. After crashing his car, he confesses that he needs something to do and hopes to find his one true love. So he holds auditions for a rope model for his photography book.

Mariko shows up for the rope model job and Ricco instantly knows that she's the one for him. She's excited and nervous when she gets the job because that means she's going to be working closely with him for the next few months.

There's a new threat to the Ferraro family which brought a couple of interesting twists to the story along with a family mystery that gets solved.

While there was a romance, action and lots of blood shed, I didn't find this book quite as exciting as the first book in this series. I really didn't feel the passion between Ricco and Mariko even though they had quite a few passionate love scenes, the passion just didn't feel real, it fell flat for me. I understand that part of the story revolves around Ricco finding a rope model that he can practice his shibari skills on and take pictures for his book, but there was way too much time spent on the shibari aspect. Too much time telling the reader how, what and why he was using this knot, this rope or this pattern. I found myself really bored with a lot of that and for the last shibari scene I just glanced over it as I was reading.

All in all it was a good second book and I will continue to read this series but it wasn't as good as the first book.