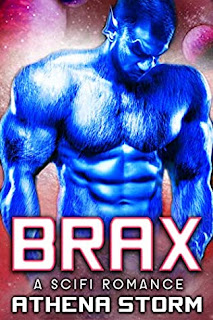 Book Description
I am Brax the Unstoppable!
I crack the heads of my enemies in combat.
And now I do dishes…
I’ve been given a chance to be the warrior I was always meant to be.
To fight for honor and glory and do all the warrior-y things that champion gladiators dream about doing when they’re children.
But there’s just one problem.
In order to do get this chance, I must take a mate.
At first I hate the idea. I am an alien savage. A brute. I answer to no one.
But then I meet Bonn Ventara. And she becomes my world.
At first I was an alien gladiator.
Now…I’ll be glad to mate her.
She’s my fated one. She possesses my soul as much as I need to claim hers.
My thoughts revolve around protecting her.
Loving her, forever.
All my glory I bring now belongs to this cute and tiny human woman.
She belongs to me. Even if she doesn’t know it yet.
Together we’ll face an adventure worthy of story and song as we save the galaxy.
But first, I’ll need her help to tackle the most insidious enemy of all…
Housework.
My Review
Brax is like a wrestling star but a warrior too. He's called upon to be the first in a group of warriors for the Coalition against the Alliance. He's bored with the fighting ring so he jumps at the chance.
Bonn is a companion. She was raised in the academy where they are instructed on how to be the perfect companion. They are then selected and sent off to someone.
This book starts off really rocky for me because of the whole companion/slave thing. I didn't like that, especially since her last thought before meeting Brax is she hoped he treated her well. But I kept reading, hoping that this story would be alright. Brax didn't want a companion but he was given one anyway and he did seem to like her when he first saw her. She was a lot different than what I thought she would be. I was expecting some shy, mousy girl that did whatever he wanted and got the complete opposite.
It was a lot of fun to watch them get to know one another because they're both really funny. I expected Brax to be a bit of a bossy caveman but he was gentle and when he was wrong about something, he admitted it and changed. I loved that about him.
This is the first book that I've read by this author but I didn't feel like I was missing much while I read this book. I'm sure there are things about this series and universe that would be more clear had I read some of the other books but I was able to read this one just fine and understand what was going on.
When Brax goes on his first mission, he decides to take Bonn with him and what they found was not good. They get into some highly dangerous situations on this mission and when they think the other is dead, they realize just how much they mean to one another. This was a fun read and I plan on going back and reading more of this series.
I give this book 4 out of 5 stars.
Posted by Mary Kirkland at 12:00 AM 34 comments