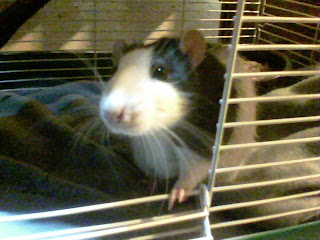 Rats will use their teeth on you in strange ways and you may not realize that they know exactly how hard they are biting you, but they do. Some rats will 'tooth' you to make you back away if they don't feel like being bothered. My Marbles dis this to me. He would grab my finger in his mouth and hold onto it with his teeth while backing my hand out of his space and then he'll let me go and push me away with his nose. Pretty much telling me to leave him alone. 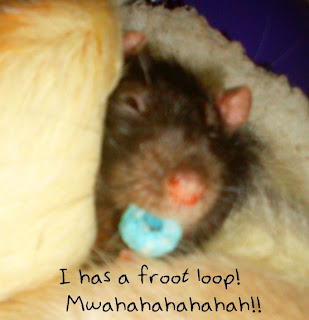 If your rat is nibbling you, seemingly grooming you like he does his cage mates, you should not stop him from doing this. This is their way of bonding with you and making you part of their pack. My rat Lucky, would Faux bite me while playing. It's not a real bite, he just grabs my fingers and presses me with his teeth, much like a human would with their fingers if they were touching you. Rats feel through touching things with their teeth so these play bites are normal and should be encouraged.

Rats have incredible micro control over the pressure they bite down with, when a rat bites down they know exactly how much pressure they are exerting. So if a rat bites you out of aggression...they meant to do it.

Most domesticated rats do not bite. Let me say this again...most rats people keep as pets...do not bite.

The only time a rat will bite a human is if they have been mishandled by humans and are afraid or if they have had very little interaction with humans and aren't used to being handled. In some cases if an otherwise happy rat bites you for no reason, it might be a sign they are in pain or sick.

If a rat is sniffing your fingers and starts to bite down and then stops suddenly, they usually are saying, "Oh hey, sorry about that. I thought this was a yummy carrot. But your finger isn't a carrot and now I know that. Oh and by the way, can I have a carrot?"

Rats feel the world around them by checking things out with their teeth, then they smell and taste. My rat Lucky likes to try and steal my rings. He'll be playing with me and grab the ring on my finger and try to run away with it. Sometimes he'll accidentally grab a little skin along with my ring and that is an accidental bite. All he knows is that there's something hard and interesting on the human hands that are playing with him and he wants to check it out, so he 'tooths' it.

If you have dead skin on your hands or fingers, your rat will become your doctor and get rid f it for you. My rats have been extremely careful as they remove scabs, bits of skin, broken cuticles and check out scratches as well as other problem skin areas. Most times they will gently pull off dead skin and scabs...and eat them. If this grosses you out, don't let them do it but sometimes they are so fast at it you might not even know they've done it until you see them munching away at a bit of a dead skin scab morsel and come back sniffing for more.

Rats are very smart and I am comfortable enough with mine to smear little bits of food on my fingers and let them lick it off without fear of being bitten. That's why it's good to let your rats nibble your fingers so they get an idea of what fingers feel like in their teeth and find out that their humans fingers are not food. Rats are smart and after nibbling something can assess whether it is food or not and will know the next time they encounter it. So if you put a little pudding on your finger and they bite down to get the pudding and find out with their teeth and tongue that there are two different textures there they will lick the pudding off and stop biting your finger.

When my rat Brodie got sick and refused to eat or take his medicine that I mixed with baby food, I would smear a little on my finger and put it up to him and he would lick it off my finger. I did this 5 times a day for about 3 weeks until he felt better and started eating off the spoon and then felt good enough to go down and eat off the plate and out of the food bowl.

I had one rat, Fang that did bite Ken 4 times after we brought him and his brothers home. Fang and his cage mates were scared and he and Patches both had upper respiratory infections which when I got them I started them on antibiotics right away and it helped but they hadn't had much human interaction and were afraid of human hands so Fang lashed out. Ken made the mistake of trying to say hello by putting his fingers through the bars of the cage and Fang saw this as an act of aggression and bit him.

I on the other hand opened the cage doors and let Fang come to me, pet his head when he came to the front of the cage and gave him treats that he slowly took from my fingers and made friends with him over a period of a week. When he tried climbing out of the cage onto my hands I let him, I let him set the pace and let him figure out if he wanted to be held, petted or come out of the cage. I never once got bit. Ken thought that because I had Fang out and he was sitting on my shoulder he could come over and say hello, even though I told him to be careful because Fang was still scared and he was bonding with me right now not just anyone. All Ken did was put his face up next to Fang while the little guy was on my shoulder and Fang got scared and bit him on the eye brow...drawing blood once again.

It took about a month but Ken made friends with Fang and the little guy even let Ken hold him, pet him and cuddle with him. Ken never gave up on our little biter and even though he didn't listen to me when I said be careful...lol they did finally make friends and fang stopped biting him. Ken was even able to put his fingers through the bars of the cage and give him a few scritches (strokes on the head or back) until he'd had enough and would walk away.

Rats that bite, do so for a reason, you just have to figure out what the reason is. In Fangs case, he came to us with an upper respiratory infection which made him feel bad and he wasn't used to human hands or being petted. With a lot of patience, love and attention Fang was able to stop biting and get lots of love and attention. 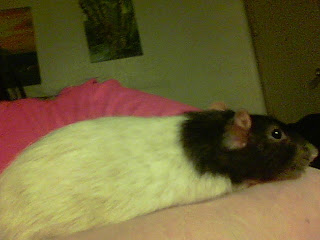 Fang, my little bitey boy became a complete cuddler that always wanted to be held. I mean all the time. lol 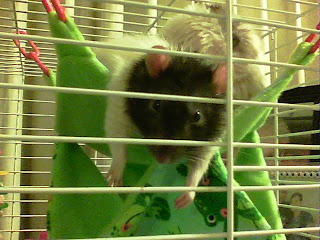 Fang, being his silly self. He would hang like this over the hammock to sleep.