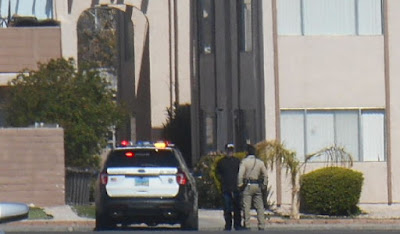 This week I spotted the police at the other end of my street. I don't usually see a lot of police down at this end but the officer had this guy handcuffed and after a few minutes he put him in the back of the police car and drove off so I am guessing the guy was arrested for something. 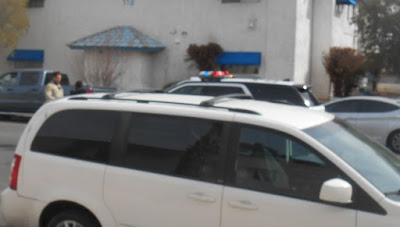 And then the next day I saw that the crazy woman who stomped across my table and chairs outside was being questioned by police. But after a few minutes they let her go. You can see the police car right over the hood of the white car. It's a little blurry for some reason.
The only other news is there was a crazy fight across the street at 10pm one night. A woman was chasing after "Justin" and screaming that he was going to go to jail for sex trafficking her. But he was walking away from her trying to get away and she was following behind him. Then she turned around and said she was going back to his house. "I'm going back to your house, Justin. What are you going to do about that?"
I haven't seen either of them before but I doubt it will be the last time I see them.
So that's it for this week's Apartment Hell  Life! Be sure to come back next week for more.
Posted by Mary Kirkland at 12:00 AM 52 comments