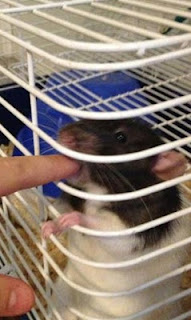 Even the most docile, playful, well behaved rats will sometimes do something that they shouldn't. Rats need a lot of free time out of their cage to keep them happy. A minimum of 2 hours outside of their cage a day is required for a happy rats, it doesn't have to be all at once. I take my boys out for an hour in the morning and again when they wake up during the day and look like they want to come out to. Then at night when they wake up again, they get to come out again. I usually have my 3 year old boys out for 2 hours a day because they don't want to be out as much, they are old and want to sleep more these days, but Lucky is only 8 months old and has a lot more energy so he comes out a lot more.

Rats who don't get a lot of time out of their cage will do things like chew the bars of their cage, tear up the cage ie..chew on everything, throw bedding around and push the things in their cage around because they are bored and are looking for something to do.

Biting
As you can see from the above picture, Fang was a biter. When we got him he was unsocialized and timid and a timid unsocialized rat will sometimes bite because they are scared. I have seen people posts absurd things in rat forums about how they 'discipline' their rats if they bite. You cannot discipline a rat. That's the most ridiculous thing I've ever heard. These people actually said they put their rats in a time out box for a few minutes or sprayed them with water. These asshats should never ever under any circumstances, own a rat.

Instead of making your rat afraid of you, the right thing to do is trust train them. Which means you keep trying to get them to come to you instead of making them come to you. Putting your hands in their cage and snatching them out is not the right way to treat a timid animal. Instead, bring the entire cage over to the couch or bed and leave the cage door open. Rats are curious creatures and they will come out to investigate what is out there.

Let them come out on their own. Leave a couple of treats out for them so they see that coming out isn't scary, in fact they get yummy treats if they come out. I did this with my timid boys and after a few weeks they came to me! They started crawling on me, giving me kisses and wanting to be held. You can either discipline a rat for not doing what you want or you can do it the right way and trust train them to trust you enough not to bite you.

I also heard people who have rats say that if a rat bites them they will either have them neutered or kill them (put to sleep). I see no reason to do either of these things. I've had hamsters and rats that bit me and never once thought about putting them through an unnecessary painful surgery or putting them to sleep. I don't know what these people are thinking.

While neutering a teenage male rat who is full of hormones making him more aggressive might and I say might help tame his aggressiveness down a little. The better thing to do is to trust train them. If for whatever reason you have a rat that no matter how much you try to work with them on socializing they still don't want to be handled...then don't handle them. Right now I have a rat, Marbles that does not like to be picked up. Once he is out of his cage and on the couch with us he will interact with us, sit on the couch with us, take treats ect. but he doesn't like too much petting or to be picked up. So we open the cage door and let him jump up on the arm of the couch and let him come and go from the cage as he wants.

I've heard some rat owners say that a rat who acts like this is not a rat they would want and they would put him to sleep so they have room to get a more social rat. To those people I say, You should not have any rats.

My Marbles is happy and healthy and I see no reason to force myself upon him and make him let me pet him and pick him up or put him to sleep because he isn't as social as some other rats. That's just crazy.

I had a hamster who bit me every single time I held her so I started wearing thick gloves to take her out. She would crawl into my hands (gloves) and come run around on the couch with us for a while each night. She was a happy little girl, she just didn't like hands. there was no reason to kill this little animal just because she didn't like hands. It was my responsibility after adopting her to find out what worked for her! Not what worked for me. Animals are not disposable, once you adopt or buy one, they are your responsibility to care for them until they die a natural death or you have to put them to sleep because they are too sick to enjoy their life any longer.

What you don't do is kill an animal because they don't act the way you think they should.