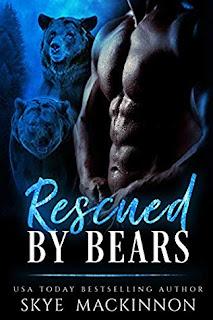 Can she tame her bear shifters or will she be their dinner?

Alone, frozen, and far from home, Isla finds herself in the care of four frustratingly sexy bear shifters. They soon end up on a Scottish island, trying to survive the disasters of a failing world.

With new relationships unfolding, Isla has to make the decision between her humanity and the bears protecting her.

Will winter drive them apart or can Isla claim her bears?

Isla lives with her uncle whom she isn't close to at all. After her parents died she became his responsibility and in the society they live in after the flooding that happened and wiped out a lot of the land in this world, men hold all the power in her village. She was studying to be the healer of her village but her uncle has other plans and tells her she is to marry a man she despises because he was abusive to another woman who escaped. She's locked in a room until the marriage can take place but she escapes and gets off the island she's been on her whole life.

She doesn't know where she's going and there's ice and snow covering the ground, she gets too tired to go on and almost dies out in the elements. She's found by one of the bear shifters and brought back to their cabin where they warm her up. She finds out about the 4 of them when she overhears them talking and confronts them pretty early on about being bear shifters. She's kinda naive, and does something dumb which is when she gets hurt but the guys bring her back and she gets to know them. She finds herself attracted to the alpha, their leader the most at first but by the end of the story she's the mate to all of them. This is a reverse harem story, so because of that I already knew that she was going to end up with more than one mate.

I really didn't like how idiotic Isla acts at times. I know she's been sheltered and is naive but she does stupid things and acts dumb at times. Isla has been bullied by her uncle, pushed around, told what to do and then she has to deal with Alis who pretty much does the same thing to her. I hated Alis's character and if you read this you'll see why and who she is, I'm not giving that away. The guys were pretty interesting characters, I hope that we get to know them all a little better in the series though because I didn't really feel like I knew them too well.

I enjoyed this book but I think the characters need to be developed a bit more and we need a little more information on how the flood happened, what caused it ect. I would also like more info on the shifter mythology because the rules for these guys were a little different from other shifter books I've read.