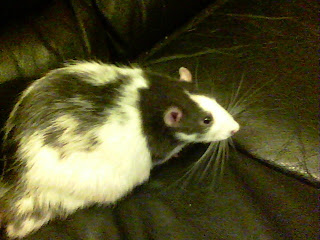 I know there are some people out there that say people should only adopt from reputable breeders when adopting rats. I'm not going to be rude and tell anyone what they should do, I will however tell you what I will and won't do.

After seeing pictures of sick rats and hamsters in the big chain pet stores, and hearing how the small animals are treated in those stores by people who have actually worked there...I will never again buy a rat or any other small animal from a big chain pet store. I have in the past but now I know that these pet stores often times get their rats and hamsters from mills. Like Puppy mills, there are rat mills that do the same thing.

There are also back yard breeders that do not know how to care for their animals and don't care who they sell them too.

I will also state that I will not adopt from a breeder at this time. Maybe sometime in the future I will change my mind but not until there are no more rats being given away on craigslist, shelters or rescues. I would much rather rescue a rat from a family who no longer wants them than line the pockets of a breeder who is breeding because they think the rats who have been sold in pet stores and are now not wanted are not worthy of a forever home.

Feeder Breeders
If the breeder you are talking to about adopting a rat from, also sells their rats to people as food for their snakes, and other reptiles...do not adopt from them! I cannot emphasize this enough. A rat breeder who cares about their line, would never under any circumstances sell one of their rats to someone as food. Most breeders make you sign contracts that you will keep in touch, will not breed the rat they give you and if for whatever reason you cannot take care of the rat they give you, that you give it back to them. So if a breeder is selling their rats as food as well as pets...they are bad breeders and don't care about their animals.


Things To Watch Out For
Most breeders have contracts that they make you sign before you can adopt one of their rats and they may even want to do a home visit to make sure you have a nice cage and the room for the rats you adopt. But if they tell you that you have to pick your rat from pictures they let you see and won't let you come into their home to see where the rats were raised and housed, no matter what excuse they have, you will want to look elsewhere.

The most common excuse for this I've heard is that they don't want any diseases, parasites or bugs being transferred to their rattery where they care for their rats, on the clothes or skin of the people coming to adopt a rat so they make you pick a rat from a picture and then they bring it outside to you. This is not how I would want to pick a new pet. I want to be able to interact with the rats and see which ones have the personality I'm looking for.

I have also heard that some breeders have a clause in their contract that says something to the effect of...if you breed the rat they give you after you have signed a contract saying you won't but you have an oops litter that they have the right to either 1) take the babies from you or 2) have the first pick of the litter.

If you see this in the contract...put it down and run away...don't walk, run! Because this is just ridiculous. After you buy and essentially you are buying a rat from them not adopting..once money changes hands you have bought...not adopted..but anyway, once you have bought the rat, that rat is now legally yours and they cannot tell you what you can and cannot do with him or her and they certainty cannot tell you that any babies born to him or her belong to them.

Also, breeders sometimes ask you to pay crazy amounts for their rats. I saw where a breeder wanted you to pay $50 for a pair of rats and she only sold them in pairs. Frankly, that's a bit pricey is you ask me.

A Good Breeder Will...
Let you see where the rats live and how they are taken care of.
Let you play with the rats and pick the ones you want.
Not hassle you after you have brought the rats home.
Will want to be kept updated with pictures and maybe an email once in a while.
Not charge you a ridiculous price for a pair of rats.

Like I said, I'm not going to tell anyone what to do, just getting some information out there. Give you something to think about before you go looking for a breeder or go to a pet store looking to buy a rat.

There are alternatives to breeders and pet stores.
There's Craigslist- They always have pets on there looking for homes.
Local Shelter- call or visit your local shelter.
There are also Freecycle Groups- I became a member of Freecycle Las Vegas and found that they have a sister site called Las Vegas Pets

That Las Vegas Pets has listings for FREE pets that are looking for good homes. If you become a member of your local freecycle group they might have a freecycle group in your area for pets as well. I actually rescued a hamster from the Las Vegas Pets in my area and the lady gave me the hamster, his cage, food, bedding and everything she had for him...for free. She had got the hamster for her 5 year old son who after a couple of months wasn't interested in the hamster any more. Sad But true.

Frankly, I don't advocate breeding pets anymore because there are sooo many animals out there looking for forever homes. Yes, good breeders are trying to better the species they are breeding by only breeding from good lines and keeping records of everything. I understand that, but still think that it would be better for all animals to have humans stop breeding them and rescue the animals that are already alive and try to find forever homes for them.