Review: Rocked By Her Alpha by Mina Carter 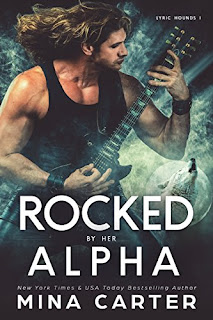 Her ideal men are long dead, but apparently it’s time to get back to the land of the living.

Archeologist Melody Simmons spends her days sifting through shit…fossilized werewolf shit. Since her last romance ended badly, she’s been off men… the ones that haven’t been dead for a couple of hundred years anyway. Close to proving that her current site is significant, she is blindsided when her cousin books her a blind date through an exclusive agency.

Knowing some battles are better left alone, she doesn’t expect much… a nice meal and an overnight stay at a fancy hotel… instead, she finds her date is hotter than hades and better yet? He’s a werewolf. A lean, muscled, longhaired alpha werewolf she suddenly wants to test all those theories about werewolf stamina with…

He wants a woman who doesn’t know who he is, he doesn’t expect to find his mate.

Werewolf rockstar and lead singer of the Lyric Hounds, Aaron Rixx has it all. Talent, fame, riches… but he’d give it all up for a woman who sees the man and not the rockstar. In a fit of… something, he books a date with an exclusive and very discrete agency. At the very least, he might get a night of sex and some alone time to write and compose new material for the band.

The instant he meets his date though, all bets are off. She’s small, curvy, beautiful… and the one thing he never thought he could have: his mate. Now all he has to do is convince her of that.

But missing siblings and car accidents conspire to keep them apart, and he loses her. Can he find his mate again before a crazy fan decides that the best way to remove the competition for his affection is permanently?

**Previously released with a different publisher under the title 'Melody's Wolf'**

Melody is on an archaeology dig where she thinks she finds proof of werewolves even before they were have thought to be around. While she's testing the samples she found, her friend sets her up with a kind of dating agency. It's been a couple of years since she dated anyone and her friend thinks she needs to get back out there. Melody agrees and goes off to meet her date, Aaron. Where she's taken is a lavish estate which makes her think her date is wealthy. But Aaron just wants to spend some time with a woman who has no idea he's a rock star. For their date he just wants to be a man...even though he's a werewolf.

These two hit it off right from the very beginning. Aaron senses that she's his mate right away and Melody is attracted to him, so much so that they start making out a few minutes after meeting. They spend the night in bed and get really close. It isn't until the next morning when she hears him singing that she realizes who he really is and when they are about to spend more time together he gets an emergency phone call and has to leave.

While Melody is on her way home, something bad happens and she loses his phone number that he scribbled on the back of her hand. That was the only way she had to get a hold of him since she never gave him her phone number. But they do find their way back to one another and it was as good as I hoped it would be. These two were meant to be together, if only they could get rid of the stalker who is making both of their lives a living hell.

This was so much fun and Holy Hotness, Batman! These two were sexy as hell together. Aaron is one alpha werewolf who knows exactly what he wants and he wants Melody.