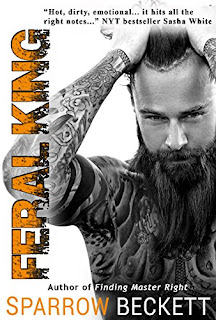 Minnow Korsgaard works a dead end job to make ends meet. When she’s hired to take care of a wealthy old man with no social skills, she’s excited to have found work in her field.

The new boss isn’t at all what she expected.

Severin Leduc is only thirty. He’s also a dominant, tattooed brute who needs someone to break through the walls he’s built. The exiled son of a wealthy family, he’s unapologetically rude and eccentric. Raised by servants, he doesn’t want extra people in his life, let alone a pretty girl who refuses to leave him in peace.

Minnow’s submissive nature sparks against Severin’s dominance. Torrid attraction flares between them. Sharing her with his best friend, Rodrigo, only strengthens their growing bond, and Severin’s life is scattered into chaos. Will he learn to trust her, or will he live the rest of his life forgotten?

Warning: Dark themes. Character's memories of prior abuse may disturb some readers.

Minnow is hired to take care of Severin or to help make sure he takes care of himself. Severin is a Dominant and a Sadist while Minnow is submissive and a Masochist. This does make for some very intense scenes but everything was consensual. Severin didn't have much family left but his brother wanted him to give Minnow and chance. Maybe get more socialized as he called it because Severin didn't like being around people and didn't know how to act around them, therefore he was just an ass to everyone. Minnow really had her work cut out for her with this job. Most people would have quit that first day but Minnow stuck with it.

Severin had so many flaws, his anger was the biggest one. He became angry over everything because he didn't know how else to act or react. At first I just thought he was an ass but as time went on it became very apparent that he had a lot of emotional issues and abandonment issues that he never worked through. But the fact that he had so many people that cared about him really said something about his character.

Minnow was wonderful, absolutely wonderful. She might have been a submissive but she was strong willed and determined and never backed down when he became verbally abusive or acted like a jerk. She brought him out of his shell, made him face up to his mistakes and when these two got together, hot damn, they were smokin' hot!

I liked that even though Severin knew he was a dominant sadist, he knew he didn't know much about the lifestyle and didn't have qualms about asking his friend, Rodrigo questions about what to do with her. Some of the things he did were over the top but Minnow was into it and liked how out of control he was at times so I didn't have any bad feelings at some of the crazy shit he did to her and with her.

I read this book in one sitting because I never knew where Severin would take me next or what this crazy dude would do next. He kept me guessing and I liked that. When I found out why Severin is the way he is, I wanted to stalk and hurt those who hurt him. His story brought out my inner serial killer and I can only hope they all got a hot poker to an eye or some other terrible event befell them. This story was emotional, touching and crazy. I loved it!