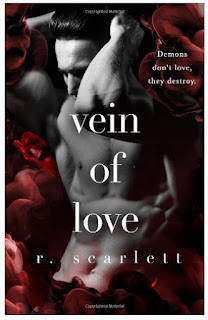 "Darkness isn't one shade, sweetheart." Three centuries ago, Molly Darling’s ancestors signed a contract in blood—daemon blood—to protect themselves from harm. On the eve she turns nineteen, Molly leaves for her birthday party against her parent’s wishes, sick of their warnings about her “betrothal to a demon.” Except that she’s very much betrothed, and he’s very much a demon—one who’s only agreed to the nuptials to use Molly’s ancient daemon powers. Brash, arrogant, and built like a Greek god, Tensley Knight keeps showing up to save Molly from otherworldly attacks, only to insult her a moment later. As Molly learns more about the demon world, she realizes two things: that her family’s safety depends on a successful marriage, while any chance of freedom she’ll ever have calls for Tensley’s demise. Yet sometimes Molly spots a tortured soul beyond those liquid grey eyes, and there’s no denying the way her skin tingles when Tensley touches it. In Vein of Love, safety requires sacrifice, foe becomes lover, and one must decide whether to kiss...or to kill.

Molly finds herself betrothed to a demon through no fault of her own. Her family made a pact with a demon family 300 years ago and when her family bears a child with Daemon eyes, that child will marry into the demon family that they own the pact to. Holly is that person and her demon betrothed appeared to her when she was but a child and put a ring on her finger that showed they planned to come back for her when she got older. That ring also hid her from other demons so they couldn't claim her as their own. She has powers that she doesn't know how to control and eyes that are other worldly but can stop a demon in their tracks. Her parents haven't shown her the contract that her family has with the demon family so she doesn't understand what is happening when the demon she's apparently promised to show's up and saves her from a gorgon who was trying to kill her.

Tensley Knight is a demon and knows he's betrothed to Molly, not that he's happy about it. He did have a life before this just as she did. But he's been ordered by his father to claim her and make sure that her position in their family is solidified by marking her- not that we ever really find out what that entails.

Tensley is an ass right from the start but you get small glimpses of the good man he is under that hard facade. There's a good reason for the way he acts and the more I read about it the more I understood why he didn't want to let himself feel anything for Molly.

I thought the pace of the book was great, it really kept me engaged because I wanted to to know what was going to happen next. A lot of stuff happened and there were several secondary characters that really added to the story. The banter and interaction between Molly and Tensley was wonderful and I looked forward to seeing them together each time they parted. This book was really about them getting to know each other, not trusting each other and all the dangers that came with the fact that they didn't talk to each other, especially how Tensley was trying to keep Molly safe and she didn't trust him because he never really gave her a reason to.

There's some sexual innuendo, flirting at times, and one hot scene where Molly let's loose because she's under the effects of Tensley's blood but even though the sexual tension is high in this story, there's no sex. The story itself was really engaging so I didn't mind that because she's only 19 years old and a virgin. Not to mention that the guy she's promised to is a demon, so I wasn't too surprised that she didn't jump into bed with him right away.

But that's why I was so irritated when this book ended on a cliffhanger. It was like a movie ending right in the middle and nothing being resolved. The story wasn't finished, and frankly nothing irritates me more than a cliffhanger that leaves the story wide open after reading a book that I was really enjoying. The story was good, the writing was great and that's the only reason it's getting 3 stars from me.