This happened this week! On February 27th at 8:30am we heard a loud crash and Ken went outside to see what happened.

After a chase with police this car crashed into the block wall that separates my apartment building from the store parking lot next door. The police swarmed this area at 8:30am, the K9 dogs were out, and my apartment building was on lock down for almost an hour. Anytime someone went outside to see what was going on, the police would yell at them to go back in their apartment. They started walking around with the K9's and told us that they were looking for a suspect who could possibly be armed. The police helicopter was out but I didn't see anyone get arrested and they finally started leaving after about 2 hours. After the police helicopter left I went outside and got a few pictures of half the car sticking through the wall.

The police were still in the parking lot when I took this picture. The block wall that separates my apartment complex from the stores next door is long and the car crashed down at the end of it.

I heard on the news later that night that the suspect crashed the stolen car, got out and hopped out over the car and ran straight ahead into that apartment complex at the end of the alley. He had to hop over their locked gates but the police never saw him come out the other side. So he probably hid in someone's apartment that he knew there until it was clear for him to come out and leave.

The front of this car was completely smashed and cinder blocks blocked the alley for my apartment complex and now several days later no one has cleaned the mess up! Cars are having to swerve around the mess because the maintenance at that complex at the en up the alley and mine are too damn lazy to clean it up. 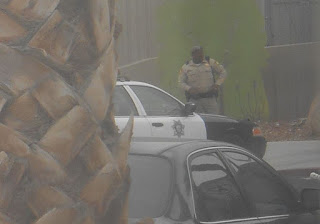 I took a few pictures out my bedroom window while we were waiting for the all clear to be able to come outside again. The police had all of the entrances to my apartment complex blocked. This is out at the end where I usually walk the dog. 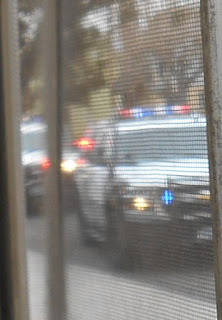 These two police cars were right in front of another entrance to my complex. 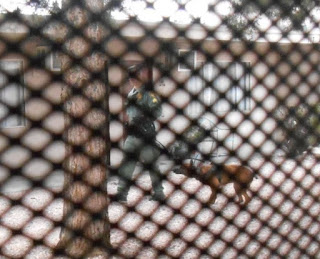 Then the K9 dog and his handler walked through my courtyard. We were told to stay inside so I had to take the picture through my screen door which is why it's so bad. 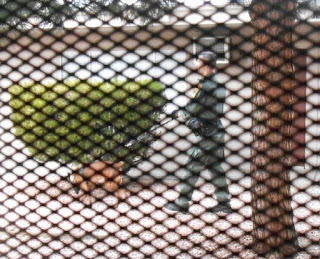 Another picture of the K9 and his handler. 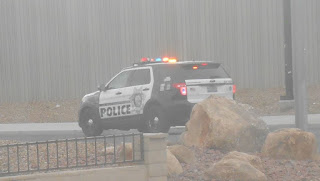 The police were driving up and down the streets and alleys across the street with their lights on looking for the guy who crashed his car but I never saw anyone get arrested. I head later on the news that the suspect stole the car, led police on a chase, crashed the car and then got away. It was an interesting morning, that's for sure.