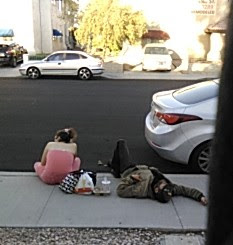 These two people were sitting on the sidewalk right outside my window smoking on the crack pipe Monday evening. The dude passed out but she kept still hitting the crack pipe. I should say they were smoking from a glass pipe that is a lot of times used for meth and crack but as someone pointed out to me that other drugs can be smoked from the glass pipes as well. Since the guy passed out and meth and crack are both stimulants, it stands to reason that they were either smoking some other drug or he overdosed and it had the opposite effect on him. 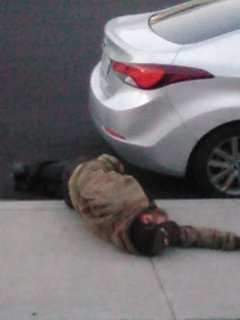 I looked outside about an hour later to see if they were still there and she had left but he was still there passed out on the sidewalk. It was about 105F/40c at that time and he had on a jacket so I was a little worried about him. I called 911 and had medics come check him out. Just wanted to make sure he wasn't dead or overdosed on drugs. They woke him up, checked him out and let him go. I would have felt bad if I did nothing and he was dead or sick or something.
--- 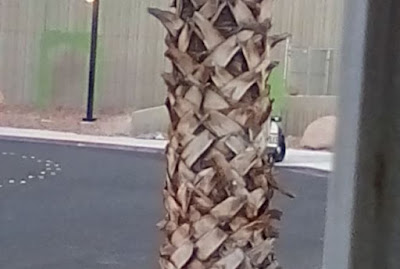 So if you look really hard you might be able to make out the tire and small amount of the police car on the right side of this palm tree. LOL
The tree was in the way when I was trying to take a picture from my window. But the police showed up in my courtyard when my neighbors daughter and son in law were at her apartment and they started fighting. The police said it was mutual combat but neither of them wanted to press charges on the other and the police left. I'm really surprised they didn't both go to jail for mutual combat because I've seen that happen a few times around here.
---
There was a woman in the pool courtyard where the bank of mailboxes are that came out and started yelling at my daughter. She said for her to tell her mother (me) to stop breaking into the pool with all the drug addicts and let her dogs go swimming.
I promise you it wasn't me. LOL
So my daughter asked her what the lady looked like and it turned out she was talking about drug dealer's wife! LOL
So my daughter told her it wasn't me and told her what I look like. So it turns out that the lock on the swimming pool is broken and drug dealer's wife has been taking her houseful of druggies out to the pool mostly at night when maintenance is gone after 5pm and she's letting the 3 dogs that are also living in her place in the pool too and it's pissing off the people in the pool courtyard.
The high this week was 108F/42C
The low this week was 78F/25C
So that's it for this week's Apartment Hell  Life! Be sure to come back next week for more.
Posted by Mary Kirkland at 12:00 AM 48 comments