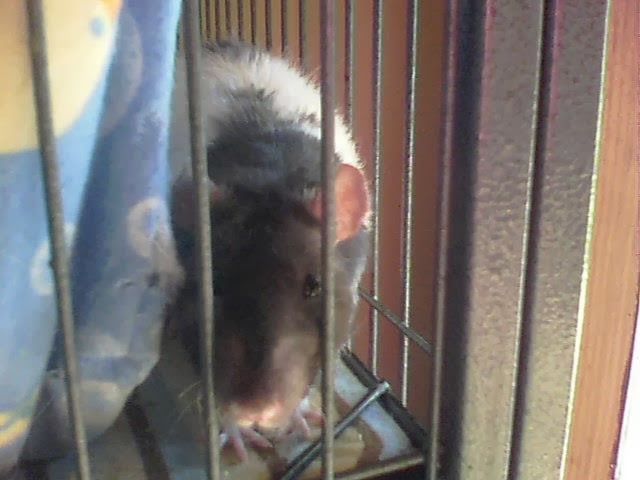 I adopted Marbles and his 3 brothers from a family friend a little more than 2 years ago and they were already 2 years old so Marbles was an old boy. When I first got them, he was one of my really shy boys and wouldn't let me touch him at all. He even hid himself when I came over to the cage to say hi. He was hiding behind this cube and then he realized I had a yogie treat for him and he slowly came out to get it. 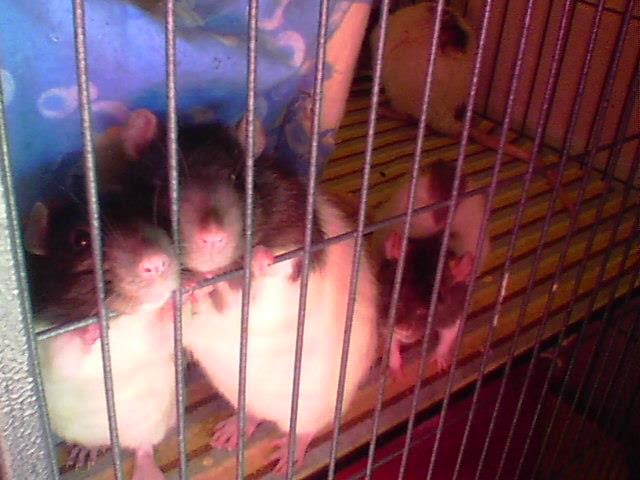 This was Marbles 3 brothers. Fang, Bandit and Patches...one by one they all passed away until only Marbles was left. All you can see of Marbles in this picture is his butt in the background. lol 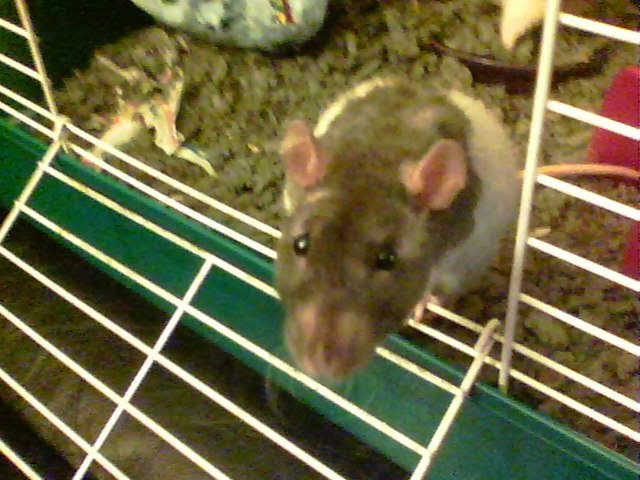 He was always very cautious when coming out but curiosity always won and if we left him alone he couldn't help but come out and explore when we left the cage on the couch for them. 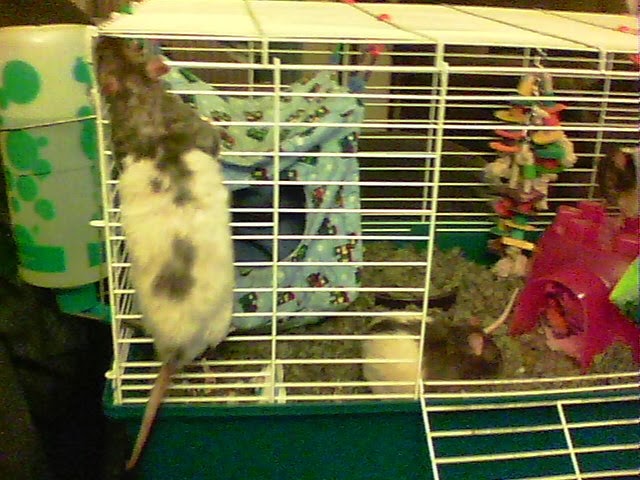 That's him climbing up the side of the cage...Silly boy. 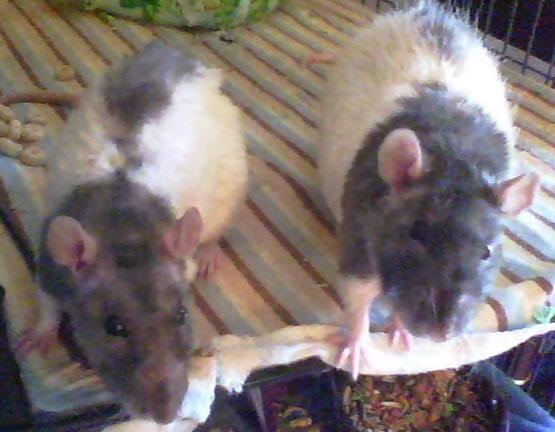 Marbles is on the right and his brother Patches is on the left. They were my rex boys, meaning they had sparse curly hair and curly whiskers. 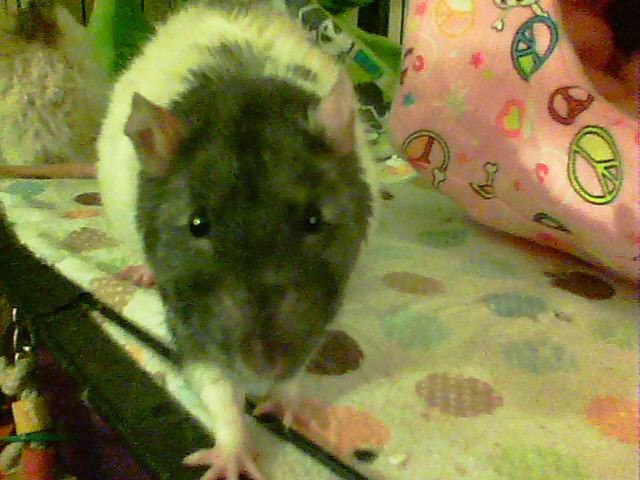 Marbles quickly got used to us and would come running over to see what good treats I had brought them. 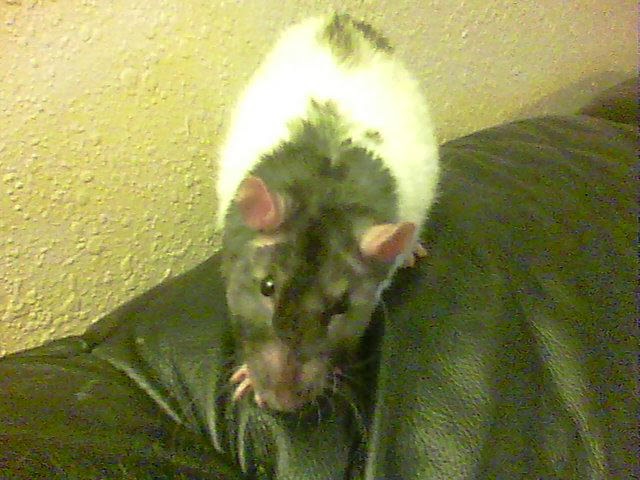 He still didn't like to be handled much but that was just his personality. He would still come out and walk all over us and play with his brothers on the couch. 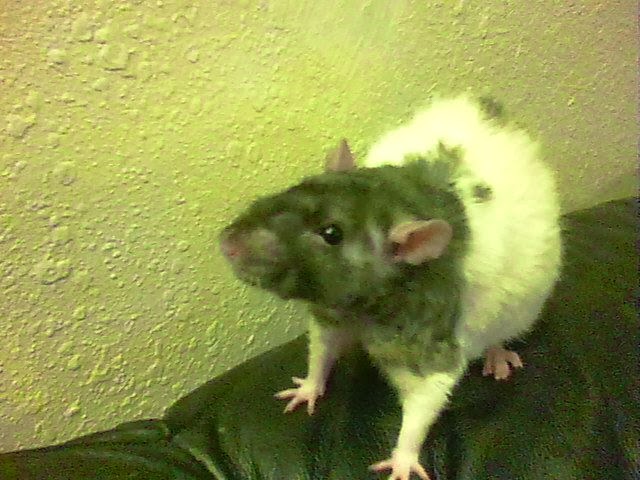 His picture is the one I used to use for my Twitter Wednesday posts. 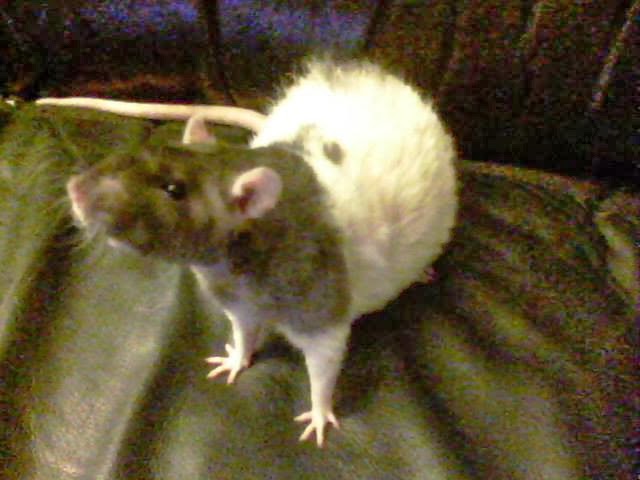 He was a real sweetheart and those missing patches of hair on his face made him unique I'm going to miss his little chuffing noises that he would make when he came out looking for a yogie or treat. He lived a long, happy life and my life is better for having had him in it for this short time. 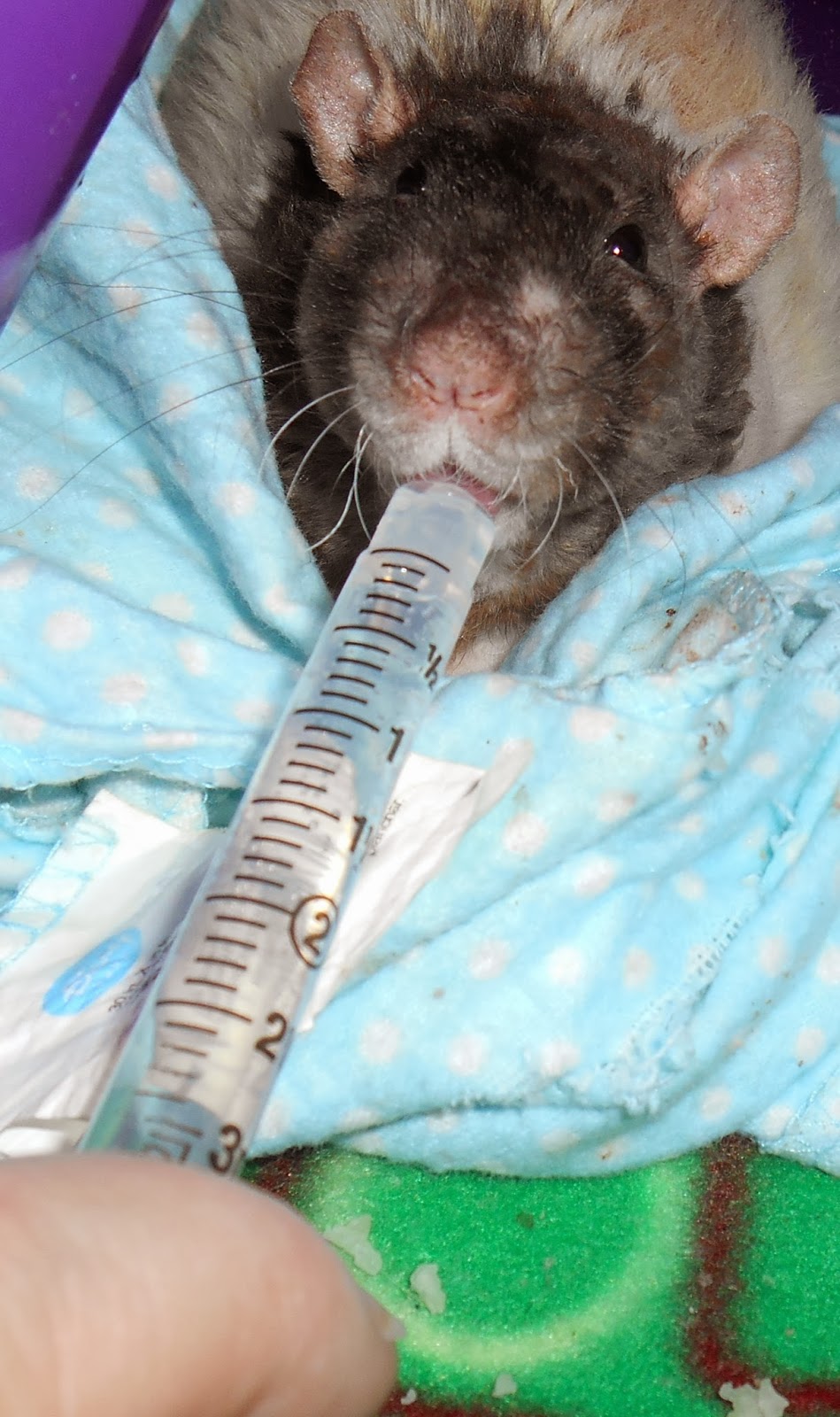 For the last few months of his life he was getting around a lot slower because he had hind leg degeneration and then he stopped eating anything but soft human foods. Then he stopped using the water bottle and I had to use a medicine syringe to give him something to drink every 4 hours so he didn't become dehydrated. He was very pampered and loved in the last few months of his life and he loved it. I wanted to give him as much time with us as possible. I think he might have even stayed around a bit longer if he hadn't developed a tumor on his shoulder recently. He was too old and not good enough health to make it through a surgery to remove it but it didn't seem to bother him at all.

Because of his hind leg degeneration, he couldn't walk around very well and he would end up pooing and peeing in his bed which meant I had to give him a partial bath several times a week if he got anything messy on him. 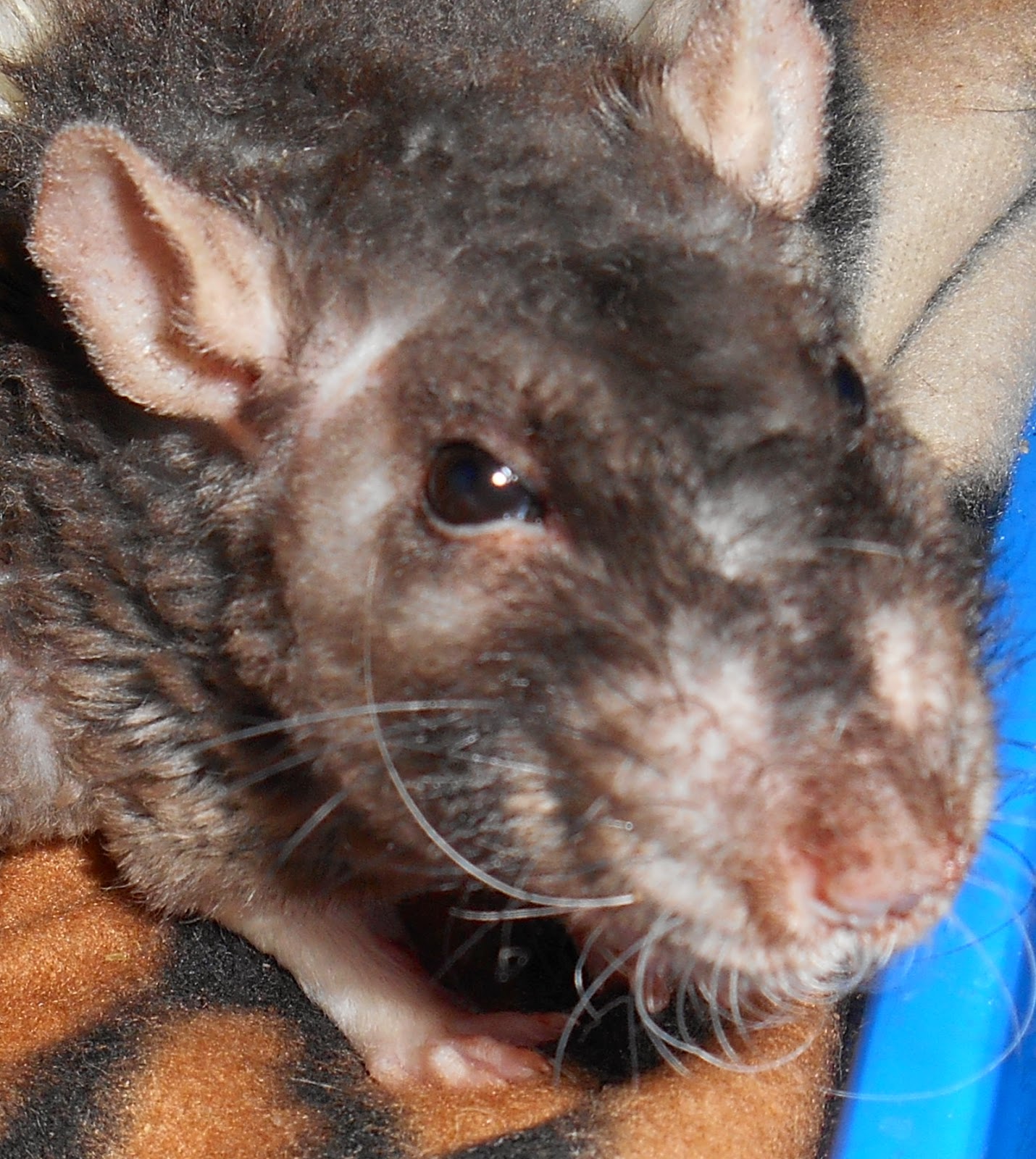 He was a grumpy old man but I loved him. 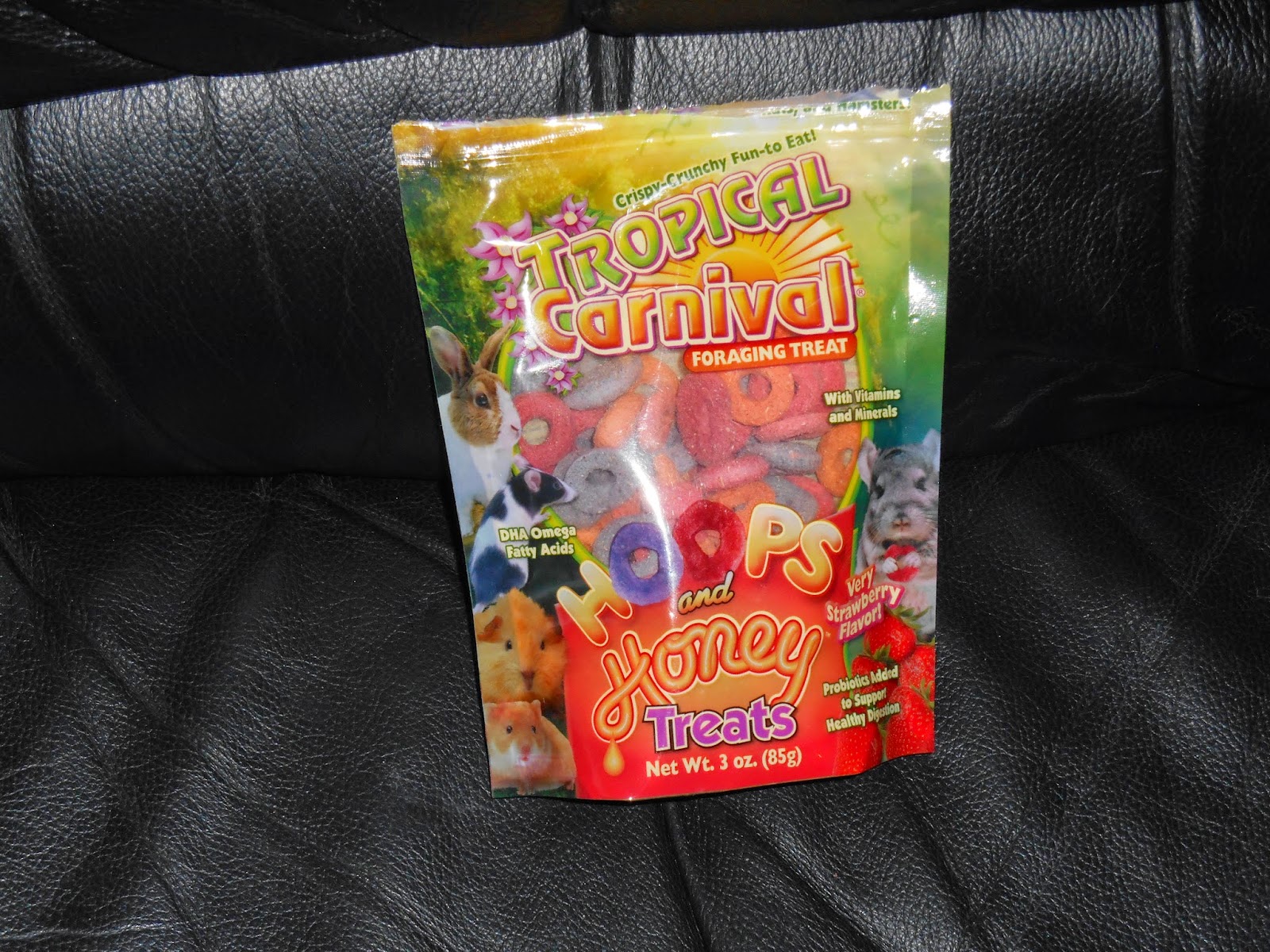 Tropical Carnival is the other brand of bagged rat food that I buy because my rats like it and I can use it sparingly as a treat for them along with the Oxbow rat food that I give to them every day.

Rats like a variety of foods and I see no reason not to give them a treat here and there. A small bag like this one will last me all month with 4 rats. They get treats but not the same one every day and some days their treats will be a yogie or pudding but my rats like this so I keep buying it for them.

I use this treat along with others to hide in their cage to give them something to do, to hide inside toilet paper rolls, to hide at the bottom of the food dish *they can smell it down there and always find it* or to help a new rat get used to me by hand feeding and using as a treat to get them to climb out of the cage.

They always smell fresh when the bag is opened and have pretty colors that can be strung up on rat toys for them to play with and bite off.
Posted by Mary Kirkland at 12:00 AM 2 comments