This is a weekly blog post that I'm calling Apartment Hell  Life. I've mentioned a few times some of the crazy things that go on in and around my apartment complex in the past 23 years that we've lived here and people keep telling me I should write a book. But instead of a book, I've decided to share the crazy things that have happened in and around my apartment complex in the last 23 years here in a weekly blog post.
----
I found out that my frail, elderly neighbor *the one with the homeless brother who broke his cheekbone a few weeks ago* passed away. I hadn't seen him outside for a few days and I had a bad feeling. He lived with another brother in that apartment and I gave him my condolences. I haven't seen the homeless brother around since he busted out their bedroom window some weeks ago.
--- 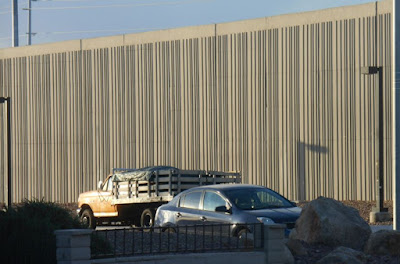 This week we have the tale of Jessica and Mikey...the local homeless meth heads that argue all the time. They are also the couple that broke into the shop a couple of years ago and broke through the wall to get into the vacant apartment next door. Yeah, these are great people. They are always getting into trouble around here. So while I was out walking Falcor, I noticed Jessica checking out this truck with the large tarp in the back that was across the street. So I came home and set up my camera and waited...

And then it happened. She got up in the back of the truck and dove under the tarp. She climbed down and went back up a couple of times.

She was looking around and pulling stuff out of the back of the truck but it was small stuff so I don't know what all she stole off the truck.

And then her boyfriend walked up and she started yelling at him like she always does. I seriously don't know why he puts up with her abuse and she is abusive. She is always calling him a fat b*tch, or a stupid little b*tch. And she hits him, I've seen her punch him right in the face. He'll try to hold her in a hug and she'll start screaming about how he's hitting her and for someone to call the cops. She screams at him that when the cops come they'll believe her and he'll go to jail and then she'll start hitting him or biting his arm. This has been going on for years.

After she yelled at him and called him names, he left. Then I watched her dive under the tarp again and she stayed there for about an hour. I think she fell asleep because she looked all out of sorts when she finally jumped down from the back of the truck. I was just surprised that the owner of the truck didn't come out and see her in the truck while they were loudly screaming at each other. It would have been kinda funny if the owner had started the truck and took off with her asleep in the back. Would serve her right. 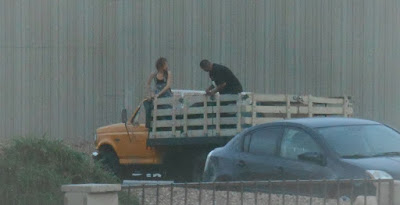 I saw them 'making their bed' by pulling the plastic tarp to the sides and securing it. But one side kept coming undone and they were getting so mad about it.

Jessica took a break and let her man secure the tarp but he failed too. LOL But they dived under the tarp for a little while but that didn't last long. I saw them out walking around a little while later and were jumping in and out of the laundry room across the street where they do their drugs. Most times they don't even shut the door and I can watch them hitting the crack pipe from my bedroom window.

And no I didn't call the police because every single time these two get arrested, they are out right away. I would have had to write a voluntary statement about what I saw and then testified, which isn't happening. So instead, I called the constables office and reported an abandoned vehicle. They came out and took a look at the truck and then left. "someone" I'm assuming Jessica or Mikey who have been using it as a drug den, moved the truck later that night to right in front of my bedroom window. Good grief. I'm just guessing that when the truck was maybe stolen and abandoned, the thieves left the keys in the car and now these two have them? I'm just guessing though. See that window with the window AC? That's my bedroom window. Why does everything happen right by my window? lol I don't know but these idiots have been waking me up at night when they start to argue. I'm waiting to see if the truck gets towed away at some point. But I won't hold my breath.
One of the arguments went like this...
Jessica: You're just mad you can't have this *points at her crotch* because you're a fat pig.
Mikey: I've had it. It wasn't that good.
Jessica: *loses her damn mind and starts screaming* You know you want it, but you ain't getting it.
Mikey: Calmly walks away.
Jessica: Lays down in the back of the truck and starts scream/crying.
They finally settled down later and went to sleep in the back of the truck.
---
The high this week was 103F
So that's it for this week's Apartment Hell  Life! Be sure to come back next week for more.
Posted by Mary Kirkland at 12:00 AM 48 comments