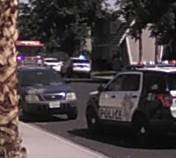 I looked out my bedroom window and spotted a police car and a fire truck a little further down the street. You can just make out the fire truck on the left side of the picture. 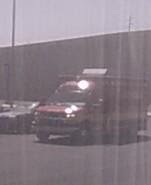 The I saw the fire department ambulance headed down that way as well. I have no idea what was going on that day though since it was down the street a little ways. My phone camera is just awful but I didn't have enough time to open my window to get a better picture. I'll have to make sure to open the window from now on. Taking pictures through the window creates this glare.
---

On Friday the ambulance showed up for someone in my apartment complex and they were taken to the hospital. But at least there were no police that day.
---
On Thursday there was a shooting just down the street from where I live. Here's the news report on what happened.
---
The high this week was 93F/33C
The low this week was 58F/14C
So that's it for this week's Apartment Hell  Life! Be sure to come back next week for more.
Posted by Mary Kirkland at 12:00 AM 45 comments