Review: You Had Me At Jaguar by Terry Spear 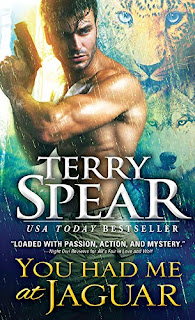 They're not the only ones on the prowl...but they're the most dangerous...

The United Shifter Force gives jaguar agent Howard Armstrong an impossible task—to protect fierce she-jaguar Valerie Chambers, when the last thing she wants is protecting. They're going international to take down a killer and he can guard Valerie all day long. But guard his heart? He doesn't stand a chance.

Val is an Enforcer for the United Shifter Force (USF) and when she gets sent on a mission to catch a jaguar shifter who killed his wife after he turned her into a jaguar shifter, the mission is harder than they thought it would be.

Howard and his partner are sent to be Val's backup when she goes after a violent shifter. Howard has the hots for Val and wants to date her but she's not really taking to his flirting because she's much to engaged in getting the guy she is sent after.

Howard and Val get closer as they go to find Bowie and kill him for murdering his newly turned mate. They make their way to Belize where they believe Bowie is hold up and where Val's parents who still work for the USF are also on a mission.

Howard and Val are fun together but I liked Howard more than Val at times. I found myself being bored quite a lot while reading this book. I usually read pretty fast but this book took me a few days to read because I just couldn't get into it for the most part. Trying to find Bowie just took way too long and most of the things that took place while they were trying to find him just weren't exciting enough to keep me engaged. The romance was slow going at first and then all of the sudden, boom! they're in love. I had a hard time believing their feelings for each other because I didn't feel much excitement from them.

The story wasn't a bad one, I just don't think it was for me.