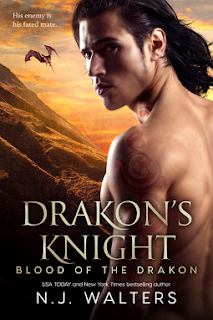 Drakon Jericho Drake, the child of a pure-blood dragon and human, has a simple plan: Kill the leader of the Knights of the Dragon and start a war. Except, when he meets his target, Karina Azarov, she can’t remember who she is. Worst of all––he can’t kill her. His dragon side has just claimed the dangerous woman as his mate.

Karina has no idea why these Drakon’s have taken her to their home. And she most certainly does not understand why she’s so drawn to her captor. Maybe because he’s strong, intelligent, and caring, in his enigmatic sort of way. One thing she knows, he’s not going to hurt her. If only she could remember something from her past that would explain why these Drakon’s hate her so much.

But if her memory returns, mated or not, he may get his war.. And one of them will die.

Karina was marked for death by the Drakon's because she's the leader of the Knights of the Dragon but when they pull her from the car crash, Jericho can't kill her because his dragon has claimed her as their mate. When the Drakon's talk to her they find out that she can't remember who she is or what she does. She has no idea why they would want to kill her. Even more curious is a tattoo on her that has a big wound through it from the crash that the Drakon's find is magical in some way. She's been having horrible migraines and has been taking pills for it but the pills aren't what they seem either. So she's been lied to by the Knights and didn't realize that either.

Jericho knows she could get her memory back at any time and he and his team members know they can't trust her because of who she is but she's not what they expected at all. The Knights of the Dragon kidnap the Drakon who are half dragon half human and drink their blood to heal themselves and live longer. Drakon's can shift into a dragon so that's another reason they are caught, caged and experimented on. So there's a real problem with keeping Karina around since her people will be looking for her.

When they all finally come face to face with the person who has really been pulling the strings behind the scenes for the Knights of the Dragon, a shocking revelation will be revealed. Poor Karina has been lied to and manipulated for years and she didn't even know it.

There were so many secrets and twists right from the beginning of this story and I was excited to see where it all was going. The second half of this book was filled with so many twists and turns, lies and intrigue that I never knew exactly where it was going. This is the 7th book in this series and while it would be better to start reading from the beginning, you can read this book and still understand what's going on.

I voluntarily read and reviewed an advanced copy of this book from NetGalley. All thoughts and opinions are my own.