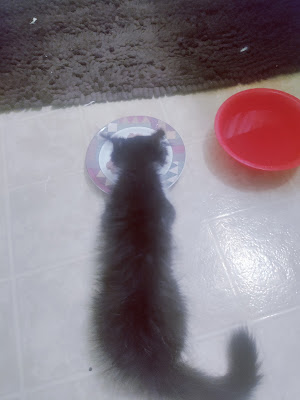 My daughter was outside and this tiny kitten ran up to her, let her pick him up and when she did she could tell he needed help. He was tiny and all skin and bones. She brought him inside and gave him some wet food and water. We wanted to keep him but we're both allergic to cats. My eyes started swelling and getting red right away. So we called Animal Control to come get him. Falcor wanted to play with him so bad but the cat kept hissing at him. So we kept them separated until Animal Control got here which was only about 20 minutes. 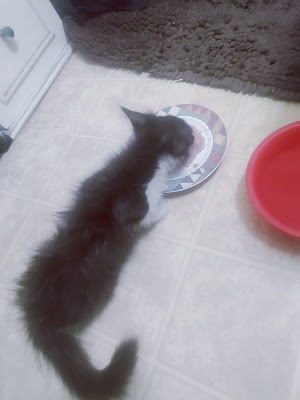 The Animal Control lady said that because he's so young and friendly that he might be adopted pretty easily. But if not they will neuter him, clip his ear and drop him back in our neighborhood. I hate that they do that to cats here. A lot of time the cats end up hungry, sick or hit by cars. It makes no sense to me. So we'll keep an eye out for him to see if he's back in the neighborhood anytime soon. If he is, I'll start buying cat food and putting it out for him. There's 2 ladies across the street that feed the street cats that live over there. 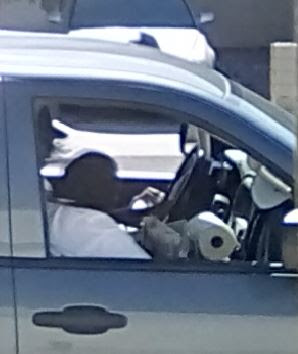 I saw my neighbor had parked their truck in front of my window this week. These two elderly people will sit in their truck every single morning until around noon. Doesn't matter if it's hot, cold or in between. They've been doing it for years. They love to gossip and everyone in the neighborhood will go over and talk to them. If I want to know about something that happened on my street all I have to do is wait a couple of days and then go talk to them. Sometimes they'll know what happened.
The high this week was 110F/43C
The low this week was 76F/24C
So that's it for this week's Apartment Hell  Life! Be sure to come back next week for more.
Posted by Mary Kirkland at 12:00 AM 50 comments