Review: All Roar and No Bite by Celia Kyle 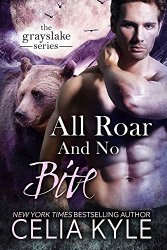 Who needs claws when you’ve got a baseball bat? Lauren Evans sure as heck doesn’t.

Human Lauren has a protective streak a mile wide and one immediate goal in life—get her best friend out of an abusive household. If that involves a little bat-based redecorating, so be it. Unfortunately—or fortunately—a certain sexy-as-hell cop breaks up the fight before she has a chance to really get going. Grayslake police officer Van Abrams is too hot for his own good, and his handcuffs make all those wonderful places tingle. Too bad he, you know, arrested her and stuff. But then he becomes overbearing, demanding, and commanding. Suddenly Lauren finds herself in his arms, in his bed, and mated to his werebear butt. What’s up with that?

Werebear Enforcer Van Abrams doesn’t want anything to do with humans. He’s got reasons, and they’re damn good ones. He doesn’t need to explain himself to anyone, especially the curvaceous, luscious, gorgeous, human Lauren. Then, his bear decides Lauren is his mate and Van’s anti-human feelings abandon him. He still hasn’t figured out if that’s a good thing. Of course, when danger rolls in from Boyne Falls and joins with a powerful prick from Grayslake, Van realizes that, human or not, Lauren is his.

Van hopes he can kill their enemies and still make it home for dinner.

Van doesn't like humans but when he goes to a domestic abuse call and ends up arresting Lauren for assaulting the Mayor, he finds out things aren't always what they appear. Lauren was just saving her best friends life or at least saving her from being beat and abused once again from her dirt bag husband. I was rooting for her every time she hit the bastard but he pressed charges and she's arrested. But because he's the Mayor, charges get dropped, a quickie divorce is filed and papers are signed so no one looks bad and no one can say much about the incident. That should have been the end of it but the Mayor is an ass and he doesn't let it go.

Van knows that there's something between he and Lauren so when it looks like her life might be in danger he brings her home and tries to get to know her better but there's always something that happens to stop an easing into a relationship and this is no different.

Lauren gets scared, terrified actually and her eyes are opened. This was the part of the book that I didn't care for because according to their laws if a human finds out for sure about them they have two choices, become a mate to one of their people or be 'dealt with'. So in all actuality she really didn't have a choice, death or mate. I didn't care for that aspect but it did work out but knowing that Ty would have had to kill her if she had chosen the latter doesn't sit well with me. I don't think he or any of them would have been likable after something like that.

There's some drama going on with other were animals and there's a crazy conclusion to that story line but it really added an interesting bit of drama to this story.

I really like the little bits of Anna, her best friend who is getting out of a bad marriage that we see. I am hoping that we see more of her and her new man in one of the next books. I really like all of the other characters and am looking forward to seeing who finds their mate next and how it happens.