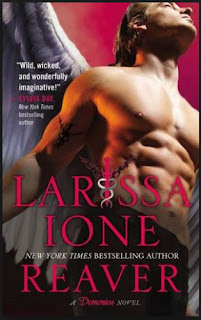 Reaver is an angel with a past, a record, and a less-than-heavenly attitude. Powerful enough to fight alongside the fiercest battle angels-and crazy enough to risk his wings on a one-way mission to hell-he's agreed to go where no angel has ever gone before . . . to steal the most seductive and dangerous prize of Satan himself.

Harvester is one of the Fallen, a once-heroic angel who sacrificed her wings to work as an undercover agent in hell. But now her cover has been blown, and she's doomed to an eternity of agonizing torture. Even if Reaver can snatch her away from Satan's lair, even if they can fight their way out of the underworld's darkest depths, there is one thing Harvester can never escape-her newfound thirst for an angel's blood . . .

Reaver lost his memories because of some bad things he did but now he knows that the four horsemen of the apocalypse are his children. Harvester went undercover but now her cover is blown and she's damned to be tortured in hell for all eternity. But Reaver can't let that happen so he enlists the help of a few people and goes in after her.

All of these characters are thousands of years old and immortal and it's a good thing because even though they can be hurt, they heal. But dang, this author really put the hurt on in this book. Harvester's dad is Satan himself but that doesn't stop him from putting a hurting on his offspring when he finds out that she betrayed him. I mean he is Satan after all.

Harvester can hardly believe it when Reaver shows up to rescue her but the happy happy joy joy feelings that I was expecting when he showed up to save her from an eternity of torture, just wasn't gonna happen between these two. They are at each others throat, trading insults while trying to get out of hell (Sheoul). Harvester started out as an angel but she fell from heaven so that she could keep an eye on the horsemen and help them. In the time she's been in hell, she's had to bring the bad and it's taken a toll on her personality, her life and her soul. She's no longer the sweet angel she once was but she seems ok with that.

Reaver also has personal reasons for wanting to save Harvester from hell. He's hoping that she'll be able to help him regain some or all of his memories. Neither of them realize that they knew each other before they became who they are now but when they finally realize who the other is, I knew it would either be incredibly sad or incredibly joyous depending on how they both felt about who they are now.

This series has been one of my favorites and I've been waiting to read this book for a while. I'd fallen behind with this series and am finally playing catch up. I was half way through this book when I thought that some things were going to get left untold and then by the end of them book it all made so much sense! I am so happy with this ending and all of the questions I had that were finally answered. This was a fantastic read and a great addition to the series. I thought some of the other books in this series were great but this one was one hell of a ride. (See what I did there?)