Book Review: Chosen by the Alien Prince by Kyla Quinn 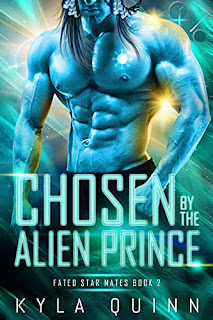 Book Description
I thought I’d become rent-a-womb for aliens, instead I’m handed to an alien prince. I’ve no idea why because he can’t stand to be alone with me.
I’m abducted by aliens and slung into holding cells with a group of other ‘lucky’ human women, but I don’t have long to figure out what’s happening because I’m taken elsewhere.
To the blue alien prince with a killer body, lethal claws, and horns.
Although he's definitely not horny. This moody and domineering alien refuses to touch me, but also pretends I’m his mate when he takes me around his swanky city. Turns out his parents want a baby blue grandchild and my hot alien prince isn’t the fatherly type.
The more time we spend together, the more I want him to throw me on his inviting bed and do wicked things to me. And I swear he looks at me as if he wants to devour me too—in a good way.
I’m on a countdown. If I don’t get pregnant with the prince’s baby soon, I can kiss my life goodbye. How far is my prince prepared to go to protect the woman the stars fated him to meet?
Chosen by the Alien Prince is a full-length, standalone sci-fi alien romance featuring a brooding, seductive alien who’ll do anything to protect his human mate.
If you love sexy aliens, strong heroines and fated mates romance, you’ll love this new series from Kyla Quinn. No cliffhangers or cheating, and a happily ever after—I promise!
All books in the Fated Star Mates series are standalones featuring different couples. They can be read individually but the series is best read in order.
My Review
This book starts off with Hope and other humans being abducted by aliens. They are taken to the alien planet, experimented on, tested to see if they were breedable. The aliens weren't having as many babies and female babies were rare so they needed to find other females to breed with but instead of going to other planets and making nice and asking for volunteers, they abducted females.
Hope was one of the human females that was abducted and taken to the alien planet. After being tested and implanted with a communication device so she could communicate with the aliens, she was selected to be the female that would breed with the price so his family line could live on. But when Tor first meets her, he's not interested in breeding with a human because he finds her lacking.
Hope doesn't want to have anything to do with Tor either and they both let each other know it. Tor is a seven foot tall, blue skinned alien with horns and a tail. So he intimidating to a small human female but his outright disgust of her at first doesn't go over well with her either. But she has to stay at his home until his mother is satisfied that the breeding between them won't work.
The more time they spend together though, the more they get to know each other. Then Tor realizes that she has something called Sol and that they are true mates and both of their feelings change when they can feel the mate bond between them. Things would have been fine if the government known as the "Regime" hadn't interfered and tried to take over the monarchy.
Tor was the Prince but his mother was the ruler but the regime really interfered and swayed her decisions. Tor hadn't really taken his Prince roll seriously so the regime was easily getting more and more control and power. So by the time he realized what was going on, it was too late for him to do anything about it. I am really looking forward to seeing Tor take back the crown and what will happen next. This is the 3rd book in the series but the first one that I've read. I didn't feel lost at all but I do want to read all the other books now.
I give this book 4 out of 5 stars.
Amazon
Posted by Mary Kirkland at 12:00 AM 12 comments