About two months ago the tree trimmers came by and trimmed up the tops of the palm trees. Only problem is they left palm fronds hanging down on two of the trees. There's one palm fronds each on the right tree and the far left tree. 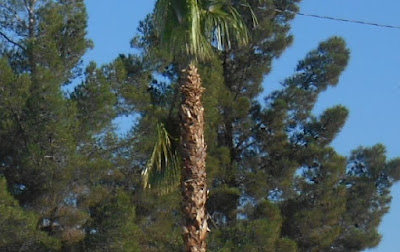 The one on the right was harder to see so I enlarged it a bit. They have been pointed out to the manager by several people because these things have thorny spikes on them and if they fall and hit someone, they could potentially cause some damage. But the manager doesn't care. I was waiting to see if they would fall in the wind and one of them finally did so I took a picture of it from my bedroom window. Thankfully it didn't hit anyone on the way down. 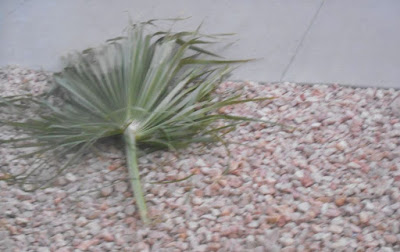 This week my city also passed an ordinance that makes it a misdemeanor for homeless people to sleep on sidewalks or the ground. They can now be charged and given a $1000 fine and /or up to 6 months in jail but only is there are open beds in established shelters. Here's the article about it.

While I feel bad for the homeless people out there. I also understand the people not wanting to see tent cities pop up in their neighborhoods. I've seen some tents in my neighborhood over the years. This week the homeless people in my neighborhood took a mattress out of our garbage can and threw it over this wall which is just behind my apartment complex. On several occasions I've been walking by this mattress and people have been laying here smoking who knows what out of their meth pipes. It makes me feel less than safe walking by this at night knowing they are doing drugs because druggies are unpredictable and you never know if they'll try and rob you for money. It happens around here all the time. 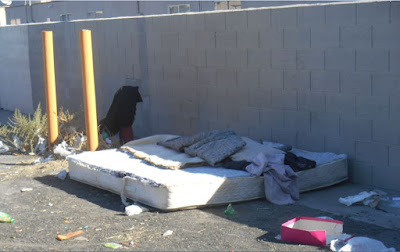 So while I understand wanting more shelters, more beds and more resources for the homeless, I see the other side of not wanting the drug addicts who won't go to the shelters, in our neighborhoods sleeping on the sidewalks and near where we live.

So that's it for this week's Apartment Hell  Life! Be sure to come back next week for more.
Posted by Mary Kirkland at 12:00 AM 40 comments