This was a hell of a week. So much happened.

Two of the drug dealers in my courtyard were evicted in the past 2 weeks. The latest one just this week. The apartment was in his girlfriends name and she moved out last week after getting an eviction letter. The manager found out that the boyfriend was staying in the apartment when he's not on the lease so she had the constable remove him from the apartment while he was there serving someone else a 24 hour notice.

The guy came out of the apartment and 9 other people followed him out. All of the other people were homeless/crackheads that hang out around the drug apartments.

Then the other night another neighbor knocked on my door asking Ken if we got a 30 day eviction notice because they got one and have to be out by April 16th. We didn't get one but I think they got one because of the loud parties and because an older lady that lives in this courtyard accused their younger son who is 16 years old and on house arrest of offering to have sex with her for money. And she's telling everyone who will listen that he said that. I don't know if he actually did that but who knows. But they got a 30 day no cause which you cannot fight. So that's 4 neighbors in my courtyard that are being evicted or have been in the past month. Now if only we get quiet people in here.

Then on Tuesday the woman who had been standing in her doorway naked last week got into a fight with her boyfriend and the police were called. I got some of the argument recorded. You can't really see much but you can sure hear her. She kept hitting him while they were outside and the manager saw it.

And before they took it outside they were arguing inside...


Apparently she had a few thousand dollars in cash and he had put it in his pocket and tried to leave with it. When she was arrested a little while later, he tried to take the envelope of money from one of the cops and they wouldn't give it to him. 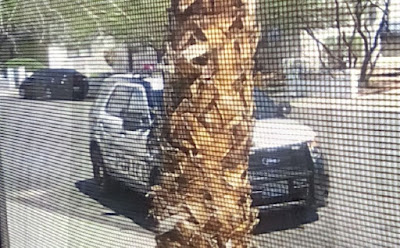 The police showed up a few minutes after they were arguing outside and arrested her for domestic assault. I took a picture of the police car from my bedroom window. 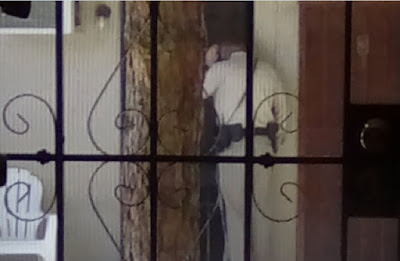 The police wanted to go inside their apartment but they wouldn't give the cops the keys to the security door (That they just had installed the day before) so they couldn't get in. They said they would need a warrant to get inside. 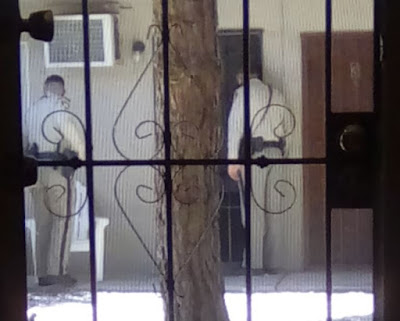 The police sure tried all of the windows and the door several times before they gave up and walked back out to the car they had her handcuffed in and then they left. The apartment manager saw most of what happened and she said they are getting a 30 day no cause eviction notice. So that was my week, how was yours?