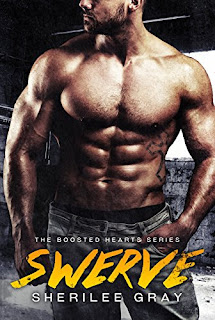 Book Description
Rescuing a distressed redhead in a Poison Ivy costume is the last thing Hugh should be doing, especially in the car he's just boosted.
He definitely shouldn’t be asking her to share one hot night with him, not when he could bring danger to her door. But a thief like him can't offer more, no matter how much he wants to.
After a confidence shattering, career destroying break-up, Shay swore off relationships forever. So it's a good thing the raw, bearded, mountain of a man who came to her aide, isn't her type.
But as one reckless hot night leads to another, their casual, no-strings affair starts to feel like so much more. Can two hearts with too many secrets dare for a future?
My Review
After Shay broke up with her jerk of a boyfriend, she isn't looking for another relationship. She's at a costume party dressed as Poison Ivy when on her way home she meets Hugh. He saves her from a guy who had been bothering her at the party and followed her out. Hugh is a big guy, very intimidating so it doesn't take much convincing for the other guy to take off. When Hugh offers Shay a ride home, she isn't sure she should trust him but she finally does and gets a ride home.
Hugh isn't the kind of guy that should be trying to get a sweet woman like Shay in his bed, even for a night. With the business he and his brother are in, he could bring trouble to her door fairly easily. Hugh steals cars for a guy that's holding something over his head. But he only has to steal a couple more cars to get out of this deal for good. Too bad the bad guy is going to do whatever it takes to keep Hugh stealing for him.
Hugh let's Shay know that he wants to spend the night with her but she's reluctant at first even though she's attracted to him. Hugh let's her know he's not looking for a relationship, just one night and she agrees since she isn't looking for one either.
The sexy times are abundant and graphic especially after Hugh doesn't want it to be just a one night stand. They agree to keep seeing each other but only for sex. That bothered me a little because they got closer but they really only got together for sex so how could either of them want any kind of relationship when they didn't know each other? So we got page after page of sex with very little story. We know that Hugh is a thief but wants out. We know that Shay has an ex that wants her back but wants to change everything about her in order to make her acceptable to be around his friends and family. And then we find out that Shay's mother was a real winner, leaving Shay to care for herself and go hungry when she was little before dumping her on her grandmother's doorstep and not looking back.
Shay's mom shows up and steals from her again, since it wasn't the first time. But Shay doesn't stand up to her mother and lets her walk all over her which is why the mother felt like she could do it again. Shay is too much of a pushover for my liking. But Hugh is too crude and vulgar for my liking.
So all in all it ended well but it wasn't great for me.
I give this book 2 out of 5 stars.
Amazon
Posted by Mary Kirkland at 12:00 AM 16 comments