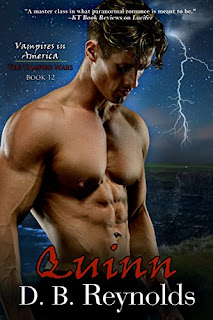 Ireland—a land of magic and fantasy, of fierce warrior kings and fairy mounds . . . and, of course, vampires who’ve been around for nearly as long as those beguiling fey.

Brilliant and ambitious, Quinn Kavanagh was aiming for the top, even before he was turned. But now, as a powerful vampire lord, he’s driven by the demands of his blood, compelled to conquer and destroy, to defeat Ireland’s criminal ruler, and make the territory a better place for all its vampires and humans alike.

Smart and beautiful, Eve Connelly was a graduate student with life’s endless possibilities stretched out before her. She knew nothing of vampires and didn’t care . . . until she watched two of them murder her beloved brother. Now she’s driven, too. But she doesn’t want to help Ireland’s vampires—she just wants to kill them.

Bound together by love and hate, Quinn and Eve will risk everything to bring down the bloody regime of Ireland’s current vampire ruler. But in order to find revenge for Eve and the ultimate power for Quinn, they first have to learn to trust each other. And that might be the most dangerous thing of all . . . .

Eve had seen her brother brutally murdered by vampires and she vowed that day she would get justice or revenge for her brother's murder. She finds herself going out at night and killing vampires. She's hunting down bad vampires and getting rid of them.

Quinn had plans of becoming Lord of Ireland and he was willing to do whatever it takes in order to get what he wanted. So when he notices Eve going into an alley with two bad looking vampires, his first instinct is to leave her be but he changes his mind and goes to make sure she's alright only to find that she can take care of herself.

I found the first half of the book pretty slow but things do pick up a bit after that and we find Quinn trying to take over another vampire's territory and criminal business. The battle that happens between these two vampires is crazy and I would say blood filled but when vampires die they turn to dust so it's dust filled. But I did struggle to finish this book because most of the story just didn't move along at a fast pace and I found myself a bit bored with the story and the romance that I had hoped would bloom between these two.

While there was quite a bit of sex happening between Eve and Quinn, it was just sex. I didn't really feel a connection between these two, no real romance or deep feelings until the end of the book and even then it was meh at best.

I've only read a few of the books in this series and while I liked one alright, the others just haven't been to my liking. I find this book to be too dark, too gruesome for my tastes. This series is categorizes as paranormal romance and to me the romance should be at the forefront of the story but I really didn't find that to be the case with this book. To me the romance takes a backseat to the danger, gore and criminal elements of this world. If this had been a horror novel I wouldn't have had a problem with these elements but it's not and that was a problem for me. I mean the book starts right off with a dead guy and a woman in shock from the horror-fest she just witnessed.

I absolutely hated Eve's mother and was actually hoping some bad vampire might eat her for dinner, but then I'd hate to see the evil thing she would turn out to be if she were turned into a vampire.

If you like your vampires to be likable, romantic and have a conscious then this is not the book you're looking for. Most of these vampires are intimidating, blood thirsty monsters right out of your worst nightmare. Although a few of them are likable, they are few throughout this story.

This book was slow to start and only picked up a little towards the middle and end. If you're already a fan of the series you might like this book but I can't recommend it.

Disclosure: I was given this book free from Netgalley in exchange for an honest review.
Posted by Mary Kirkland at 12:00 AM