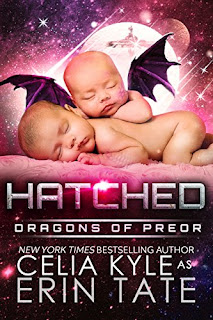 Book Description
Taulan joi Lana Coburn, War Master of the Preor third fleet, is finally having his wishes granted. He has a mate and will soon have two dragonlets to protect and love. But only if he can live to see them born. Or, as his Lana says, hatched.
This short story is set in the DRAGONS OF PREOR world and does not stand alone. It should be read after ZADRI and is a little bite of family life for those who fell in love with the Preor dragons.
My Review
I love the books in this series so as soon as I saw that cover I immediately knew I had to read this book. Lana didn't want anyone knowing she was in labor, at least not right away. She planned on breathing through the labor pains and then slowly make her way to medical when it was time to give birth. The last thing she wanted was for her over protective mate to see her in pain and start with all the worrying. But her plans went out the window as soon as her friends stopped by who just happened to be nurses. They made sure she went to medical right away which was a good idea since she was having twins.
Taulan had been having some sort of pains all morning but he didn't realize he was actually feeling the pain his mate, Lana was in so he fought through it. Taulan was Preor, a dragon shifter and Lana his mate was a human. Since there weren't a lot of Preor and Human pairings, they didn't know a lot about the babies or dragonlets that Lana was about to give birth to. But the pain that Taulan was experiencing got so bad that his friends escorted him to medical as well.
The labor was difficult and painful because her babies were not entirely human, she had to give birth naturally. The medical staff wasn't sure how the babies would react to drugs to make giving birth easier so no drugs until the medical staff figured out if it was safe for both mother and baby. Maybe sometime in the future the birthing process would be less painful for the mothers.
This novella was so cute after all the labor pains. The babies are surprising and so cute. I can't wait to read more of this series.
I give this book 4 out of 5 stars.
Posted by Mary Kirkland at 12:00 AM