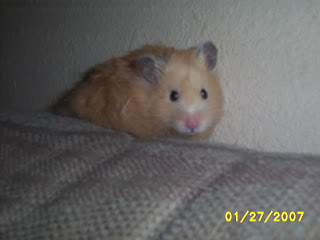 Now while most people probably thought this was really cute, all I could think of was these Syrian hamsters looked to be pretty much fully grown, they kept mounting each other and looked like they were going to scuffle right before the camera was turned off them and on to a different animal.

The reason this bothered me was because Syrian hamsters are solitary creatures and so not get a long with each other. They will actually fight to the death in some instances. So I found it a bit disheartening to see a channel that is for animal safety and boasts itself for its animal love would put some Syrian hamsters together in this way and cut to other shots of other animals when they looked like they were scuffling.

I wrote an article about my thoughts on the hamsters in the blimp that you can read here.
Posted by Mary Kirkland at 1:00 AM