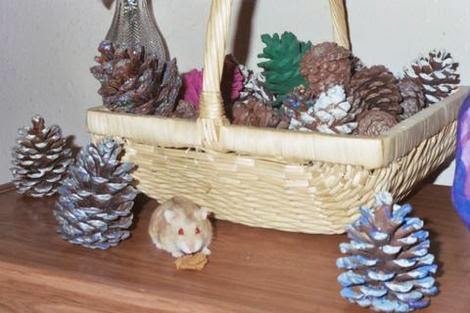 Sounds ridiculous doesn't it? Why would a reputable pet store sell you a pregnant hamster and not tell you? Well maybe the pet store wasn't a good one. I had one such adventure a few years ago when I walked into a pet store located in my local mall and decided to buy a Chinese Dwarf hamster.

She was sitting there against the front of the glass cage just looking at me with her little black eyes, how could I resist? I also bought everything I needed to go along with a new pet, the bedding, wheel, food and hamster toys.

Little did I know that this store was one of the bad ones for selling pregnant and/or sick hamsters and other animals. I soon found out this store had been shut down after I brought my hamster home and few days later heard little squeaking noises coming from her cage. Sure enough there were little pink baby hamsters laying beside the hamster I had just bought. I went back to the pet store, not to give back the hamster but to ask them why they sold me a pregnant hamster and found they had been shut down.

The books I read said to feed the mother scrambled egg and milk soaked bread in addition to her normal seeds. It also said to sprinkle Wheat germ next to the opening where the babies were and they would eat that very easily. Also provide bits of cooked chicken and cheese to give the mother hamster the nutritional boost she needs. Make sure the water bottle is down low enough so the babies can get at it when they start drinking from it.

Also don't disturb the mother or babies too much for the first few days because the mother might eat her young if she feels threatened. That means don't clean the cage for at least two weeks, but you can spot clean wet spots if necessary. The mother hamster may act more aggressive at this time until the babies are weaned, don't be discouraged by this.

Hamsters can have up to eighteen babies at once, but mine was a Dwarf hamster so I figured there was no way there were that many in the little house with her. Later on I was able to count them as they started crawling about and she had five babies.

When their eyes are open and they are crawling around you can then handle the babies, this will happen when they are about 2 weeks old. You can then remove all the hamsters from the cage, place them in a box with some of the old bedding and clean the cage. It's best to keep a handful of old bedding and place it in the cleaned cage so they come back to a cleaned cage that has some familiar smells. It will be less stressful for the family. The babies will be weaned by three weeks and it's best to separate them by sex at this time so you don't end up with more babies.

I decided to keep all the hamsters, they were too cute to give away. I ended up having to buy another cage though, there were two female babies and three male babies. For some reason the females didn't get along and kept fighting. They were drawing blood when they fought so I thought it best to separate them and I gave them each their own cage. The mother had her own cage because she didn't like being around the babies after they were weaned, she would bite them if they came close to her and she kept running away from them. She would climb in the top bubble and make her bed and sleep alone. After the females were separated all was better.

Sometimes you have to plan for unforeseen things to happen when you have hamsters. Most times though the unexpected can be good.
Posted by Mary Kirkland at 12:00 AM