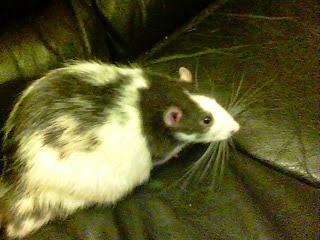 Buck Grease also called Sebum is an oily secretion from the sebaceous gland which helps to preserve the flexibility of the hair. Male rats (Bucks) will get an orange colored oily film on their skin which can become thick if they are sick and cannot groom themselves.

How To Reduce The Amount of Buck Grease
While bathing might seem like the first thing to do, unless your rat is really dirty or smelly, bathing them can actually make their skin produce more buck grease or dry out their skin. If your rat is sick or has hind leg degeneration then you may have to bathe or wipe him down with a wet wash cloth if he cannot clean himself.

Two of my older male rats had a greasy back due to buck grease but they also had hind leg degeneration which made it harder for them to clean their back. I ended up taking a warm, wet cloth and wiping them down once a week which seemed to help keep the amount of buck grease down.

Sometimes the only sign of buck grease a ratty parent will notice is the skin on the back of their rat has taken on a slightly orange color, this is perfectly normal.
Posted by Mary Kirkland at 12:00 AM