Review: A League Of Her Own by Karen Rock 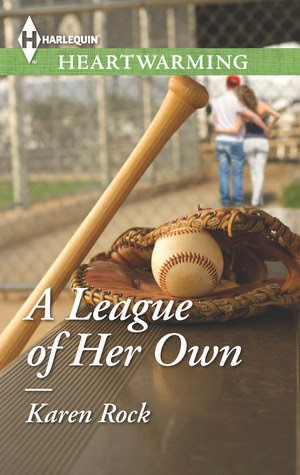 He was attractive, talented…and way off limits.

Heather Gadway may have been a world-class college pitcher and a top university coach, but she's a rank amateur when it comes to managing the Falcons, her father's struggling minor league team. And when it comes to managing her aggravating attraction to Garrett Wolf, their talented new pitcher. It's going to be difficult enough to make it as the first female manager in the league and prove to her overly critical father she's worthy. No distractions. No missteps. And certainly no romances with players. Everything stands between them—including their troubled pasts—even as Heather's world falls apart and Garrett's the one who's there to catch her…

I won this book in a blog contest and was looking forward to reading a new to me author. This is a great way to find authors in genres that I don't normally read and I'm so glad that I won and read this book.

Heather is trying to manage her father's baseball team and she just happens to be a really good pitcher herself, soo she knows a little something about the game. The team of guys aren't all that keen on having a female in charge of them but she finally shows them that she has something to contribute to the team and they start to come around.

Garrett doesn't really want to stay with the team anymore because it's struggling to win games and he doesn't see how staying with a losing team is going to help his career in the long run.

Both of these characters have trust issues for different reasons. So even though they are attracted to each other, they have a hard time trusting the other one enough to get close right away. These two characters had real flaws, real emotions and real world troubles which made their lives and this story very believable.

I found this book to be a mixture of romance, real world problems and flirty fun with a bit of baseball thrown in at the right times.