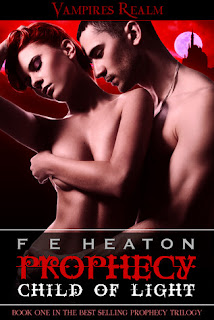 A vampire unlike any other, Prophecy lives life in the dark until the night she encounters a sensual dark-haired vampire who is both her enemy and the man who will change her world forever.

A loyal hunter for the Aurorea bloodline, Valentine is bound by duty to report her as the vampire of the prophecy, but he cannot shake the vision of them he saw in her blood. Torn between duty and desire, and determined to uncover the truth, Valentine goes against his order to execute her and kidnaps the beautiful Caelestis female instead.

Thrust into a terrifying world where the seven bloodlines and the Law Keepers are hunting her and her only hope for survival is Valentine, Prophecy battles her temptation to surrender to her illicit attraction to him and fights for her future.

When she discovers her extraordinary destiny, will she be strong enough to embrace it and stop a deadly war from igniting?

The first novel in the Vampires Realm series and the best selling Prophecy Trilogy, Prophecy: Child of Light, is part one in an epic tale of forbidden love that is sure to capture your heart and leave you craving more.

This book starts out with a great story line. A female vampire has been hidden away by her vampire family and she gets restless and sneaks out to hunt/feed for the first time by herself. After feeding she finds herself in front of a gorgeous male vampire from another family and hurries home. Valentine knows who Prophecy is and has no choice but to tell his superior but when he is tasked with killing her, he saves her instead. Valentine kidnaps Prophecy and makes her see that now that the families know what she is, they are going to kill her. She doesn't believe it until she hears her vampire brother calling her an abomination that needs to be killed.

The premise of the story was good but that's where it ends. The writing, pace and story line after they leave together was just slow and repetitive. This could have been a great book but the story was poorly executed and didn't keep me engaged at all.

When reading a romance book I like there to be an actual romance. It even has romance as part of the title...(Vampires Realm Romance Series Book 1) but alas there is no sex in this book. There are some kisses and biting but no sex. The cover shows two naked people but this book doesn't live up to the cover at all.

If there's one thing I can't tolerate, it's a cliffhanger and this book has a major one! Nothing is resolved, nothing. We don't find out if Prophecy saves or destroys them. One of the main characters disappears and we don't know if Prophecy ever finds him. A book should have a beginning, a middle and an ending that clears up the majority of the questions asked in the book. This one definitely didn't do that. It doesn't matter if this is part of a series or not, each book should resolve what questions and story lines are going on in the book. A lot of readers like myself, really hate cliffhanger endings. This book was boring, it didn't keep me engaged at all. I can usually read a book in a day but I struggled for 2 days to keep reading this book. I almost just put it down and didn't finish it but I figured I would at least have some closure to Prophecy's story and feel better about finishing it, but that didn't happen!

If you'd like to give this book a read, you can find it here.